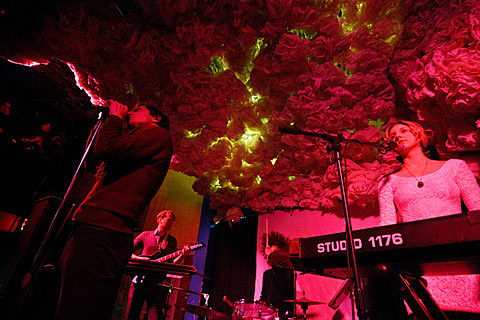 First Death by Audio, and now their neighbors Glasslands. The venue just posted the following:

You're probably getting used to hearing news like this in Williamsburg, so we'll cut right to the chase: this New Year's Eve will be Glasslands' final night of music.

When Glasslands opened in 2006 as an experimental community art space, Kent Avenue felt like a forgotten backwater, scattered with old warehouses playing temporary home to non-profit arts collectives, galleries, and DIY shows. During that time, our single block saw a handful of historically ambitious art & music spaces open: Secret Project Robot/Lives With Animals, Paris London West Nile, Pyramids, Death By Audio, 285 Kent... we're proud to have grown up in this place and time.

It was an awesome blur: there were shows with MGMT, TV On The Radio, Bon Iver, Yeasayer, Disclosure, Alt-J, there were Soul Clap dance competitions, there were aerialists, comedians, theater groups, fashion shows, raves.

Most importantly, the staff, artists, and party people that have been a part of Glasslands for the past 8 years made the venue a special creative home for music, and a joy to run. It's impossible to fully communicate how grateful we are for all your love and support.

We've got a few months left, and we intend for them to be our best ever. Please come by and help us celebrate our final season.

Goodbye for now, but not forever.

Very sad to have them go, but good to see them promising it's "not forever."

We worried about this when we wrote about DbA closing, but Glasslands assured us at the time that we had nothing to worry about. Maybe because they knew they were at least going to move? Whether this is a direct result of VICE moving in to the building is still unclear, but it's hard to say it isn't at least related.

Meanwhile there's still plenty of shows happening before they close, including many this week for CMJ. Check out their upcoming schedule here.