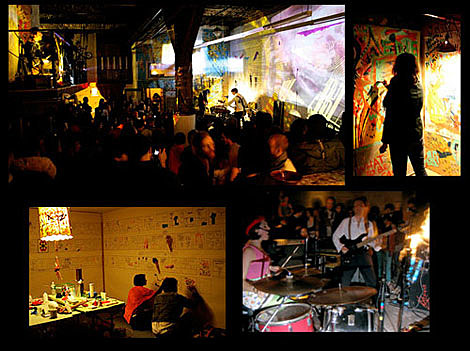 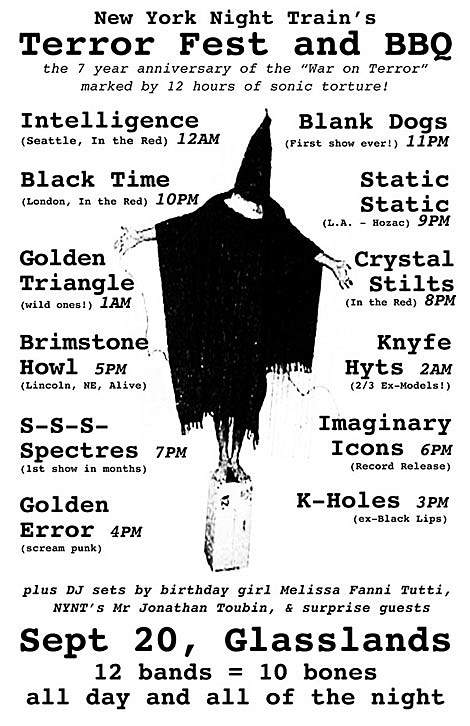 September 20 marks the 7 year anniversary of the Bush administrations "War on Terror." While this cluster of confused policies disguised as a war have been employed to justify everything from human rights abuses of practically every magnitude to the death and mutilation of tens of thousands, New York Night Train would however like to argue that edgy underground music has bloomed from bloody 21st Century American and British soil - and today's program should serve as more than ample evidence of these flowers of evil - eleven of the finest and most vital underground bands on the contemporary landscape.

This contemporary sonic "Coalition of the Willing" is best exemplified by the rare performances by our three out of town guests - two of whom record for In the Red (the label that's also brought you Black Lips, King Khan, Jay Reatard, Dirtbombs, Sparks, etc.), the masterful noisy yet catchy and structured post-punk of Seattle's Intelligence, the brilliant pure cool white heat clang of London's Black Time - plus another, whose singles appear on Chicago's HoZac - the dark, aggressive, and grimy ghetto tech rumble of Los Angeles' own Static Static (the new band led by John Henry of New Orleans' legends Detonations and featuring Red Aunts drummer Lesley Ishino).

The big news on the local front is that Blank Dogs, whose dozen or so releases have appeared everywhere from In the Red to Troubleman Unlimited, and whose identity has remained secret up to this point, will make their first public live performance ever. One of Brooklyn's bigger buzzes at the moment since their Pitchfork 8.3, the sophisticated fuzz of droney art-punks Crystal Stilts, is presented alongside its diametric opposite - the six-headed hermaphroditic bounce of festive art-punks Golden Triangle (who leave one week later for a national tour opening for Quintron and Ms. Pussycat). Knyfe Hyts are a avant heavy noise rock trio that features 2/3 pf the Ex-Models. New York Night Train Recordings' S-S-S-Spectres, who haven't perfomed live for the three months since drummers Leni Zumas Farewell Navigator short story collection took off, play bizarre quirky blasts that are located on the disjointed historic plane shared by Contortions, Birthday Party, and 1990s Providence (Six Finger Sattelite, Arab on Radar, etc.). Tom Dash's Imaginary Icons, who were the backing band for the Homosexuals last year, and play a uniquely organic cold wave-ish indie punk from a garagey perspective, celebrate the release of their self-titled debut LP today. Prolific Golden Error, whose vinyl releases have been garnering them worldwide love in the punk underground, are perhaps the most aggresive band on the bill. And the lead-off hitter, K-Holes, the new project of former Black Lips guitarist Jack Hines, have been rapidly making a splash as one of our town's best new acts since their mind-blowing set opening for King Khan and the BBQ last month.

New York Night Train's Mr. Jonathan Toubin, birthday gal Melissa Fanni Tutti, and a load of special guest will rotate platters all day and all of the night for both listening and, after the bands, dancing. If you're one of those cynics who claims there's no new good music, quit your kvetching! Get their early and stay late for a heaping helping of international contemporary sonic adventure. THE underground bill of the year hands down. We go from 3pm to 4am and we will BBQ like the good patriots that we are. Send a thank you letter to the president!