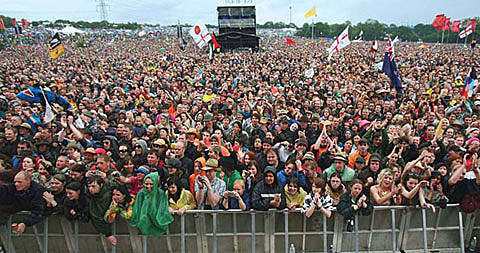 Glastonbury Festival took place in Worthy Farm in Pilton, England this past weekend. Tons of artists from all different backgrounds played the festival. The festival featured guest appearances, secret sets, and other interesting occurrences. Here are a few of the highlights.

Headliner Beyonce played a hits-heavy set with some pretty interesting cover song choices (King of Leon's "Sex on Fire," Etta James' "At Last"). But more even more interestingly, Tricky joined her on stage for a pretty inexplicable guest appearance on "Baby Boy." The trip-hop pioneer took a mic and uttered some sparse vocals as Beyonce and her backup singers belted the song. Video of the performance is below.

Speaking of things related to Massive Attack and Glastonbury, UK DJ Nick Warren, who would regularly DJ for Massive Attack in the '90s, said "My Highlight of Glastonbury Festival was James Blake live." James's set included the track "CMYK" off the 2010 EP of the same name in addition to tracks off his 2011 self-titled album. Some might say James's set was even explosive: 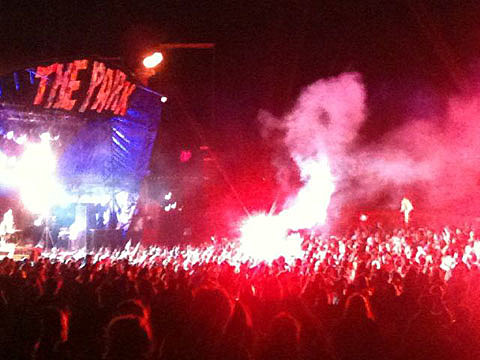 Festival attendees who were not part of the 75,000 watching Beyonce may have ended up at The Streets' set which took place at the same time. The show was apparently one of the Mike Skinner's last, who recently announced a breakup. Unfortunately, The Streets recently cancelled a trip NYC, but maybe they'll reschedule before saying their final goodbye. Video of The Streets' Glastonbury performance below.

It was Pulp's fourth Glastonbury appearance but their first for nine years and as they came on stage, frontman Jarvis Cocker told the crowd: 'We couldn't think of anything to get you so we brought the sunshine.'
After their set, which included some of their biggest hits including Disco 2000 and Common People, he added: 'Thanks Glastonbury, obviously it's been a very important place for us. When we played in '95 things took off for us and we went in a strange orbit around the earth, and now we're back home in one piece.' [Daily Mail]

Video and setlist of Pulp's performance (which Kate Moss did not witness) below.

Radiohead brought Portishead drummer Clive Deamer as a guest to play with Philip Selway. Their setlist was almost entirely made up of The King of Limbs and In Rainbows tracks, and recent non-album material, except for Amnesiac's "I Might Be Wrong." They also surprised fans of their earlier work by playing "Street Spirit (Fade Out)" as an encore. Video of "The Daily Mail" and "Bloom" and setlist below.

Cee Lo, unlike at Coachella, showed up on time for his set, which included a mix of his own material and Gnarls Barkley stuff. He also covered Black Sabbath twice. Big Boi got lost in London, but also ended up showing on time for his set. Like Cee Lo, he still embraces past projects and included a good amount of Outkast material. Big Boi-collaborator Janelle Monae played the festival too. Video of her performance of "Tightrope" below. Catch her and Cee Lo (but not Big Boi) for free at Afro-Punk in August.

Battles brought Matias Aguayo on stage to sing "Ice Cream," the song he recorded lead vocals for on their recently released Gloss Drop. Video below.

British folk/jazz legends Pentangle, who reunited in 2008 but have not been very busy since then, played the festival. Their lineup includes Bert Jansch who is currently a Drag City-recording artist and released The Black Swan on the label in 2006, over 30 years after Pentangle originally broke up. Lauren Laverne of BBC 6 interviewed the band. They talked about the resurgence of folk music and how Bert is a fan of Fleet Foxes (who also played Glastonbury). Video of the interview below.

SBTRKT, who visits NYC for the first time in July, played a live set (pictured above). His Young Turks labelmate Jamie xx (of The xx) played a set too. Jamie's "Far Nearer" single is on sale now. Pressings are limited. Check out a soundcloud stream of the track below.

Another UK post-dubstepper Jamie Woon played the festival. 3AM writes, "During my bum breaks, I caught Jamie Woon's set and it was fantastic. I've heard a lot about this chap, but haven't listened to his stuff before. Sitting in the middle of a field with a pounding head and cider was the perfect way to be introduced to Jamie's chilled but strong, powerful tunes."

Speaking of dubstep crossover, UK singer Katy B brought her dubstep-leaning pop to Glastonbury as well. She plays a private show in NYC tonight (6/27). It will be her first.

Little Dragon wowed the crowd, according to VH1 anyway:

For the UK at least, this performance of their new song "Ritual Union" is a real coming-out party for the band, who absolutely deserve to be heard on a much wider scale. It's really difficult to make smooth music work in the middle of the day at a big outdoor festival, but Little Dragon pulls it off in style.

Video of that and their whole setlist is below.

UK anti-folkie Emmy the Great covered The Pixies' classic "Where Is My Mind" with help from Tim Wheeler of the punky brit-poppers Ash. Full setlist below.

On a more negative note,

A senior member of David Cameron's Tory constituency has been found dead in a portable toilet at the Glastonbury festival.

His body was found in a portable toilet in the backstage area, where many celebrities and performers stay.

A story in the Mail on Sunday contained leaked sections of a strategy document Shale had drafted for David Cameron, in which he said the party can be perceived as "crass" and "always on the take".

Avon and Somerset police confirmed that the body of a man in his mid-50s had been found in the backstage area. A woman was seen being comforted by officers.

His body was found at 8.45am. An area between the Pyramid stage and the Other stage has been cordoned off. [Guardian]

Videos, soundcloud streams, setlists, and other stuff below...

The Streets at Glastonbury

Katy B at Glastonbury

Radiohead - "The Daily Mail" at Glastonbury

Mumford & Sons perform Roll Away Your Stone at Glastonbury 2011

Radiohead Setlist
Lotus Flower
15 Step
Morning Mr. Magpie
Little by Little
All I Need
Separator
Give Up the Ghost
Weird Fishes/Arpeggi
Staircase
I Might Be Wrong
Bloom
Reckoner
The Daily Mail
Encore:
Street Spirit (Fade Out)

--
Emmy the Great Setlist
Dinosaur Sex
A Woman, A Woman, A Century of Sleep
We Almost Had a Baby
Iris
Exit Night/Juliet's Theme
North
First Love
Edward Is Dedward
Where Is My Mind?
(Pixies cover) (with Tim Wheeler)