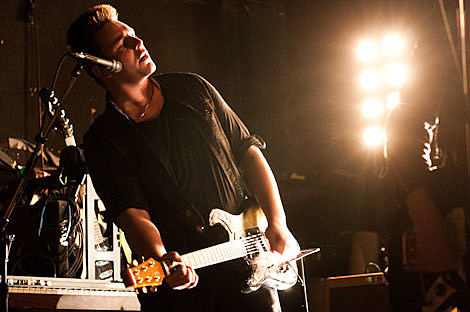 For all its profile and glamour, the Brits nomination list is never much of a surprise, given how closely it tends to mirror sales charts.

Coldplay and Duffy's four nominations are the music industry's way of acknowledging their contribution to the coffers with the bestselling British albums last year.

It is also the only way to explain the elevation of cheerful, cheesy populists Scouting for Girls.

Critically lauded bands such as Glasvegas, Hot Chip and Portishead have been overlooked, yet a comedy outfit with the boisterousness of a showband at a rugby club have gained three nominations.

Some may cast a suspicious eye on the role played by chairman of the Brits Committee, Ged Doherty, who is also head of Sony (Scouting for Girls' record company). But conspiracy theories about backroom deals are erroneous. [Telegraph]

The nominees for Best International Group are AC/DC, the Killers, Kings of Leon, MGMT and Fleet Foxes.

Glasvegas have added a March 28th show at Music Hall of Williamsburg in Brooklyn. That's two days before their previously-announced show at Webster Hall. Tickets for Brooklyn go on sale Friday. Webster is still currently on sale. All dates below...