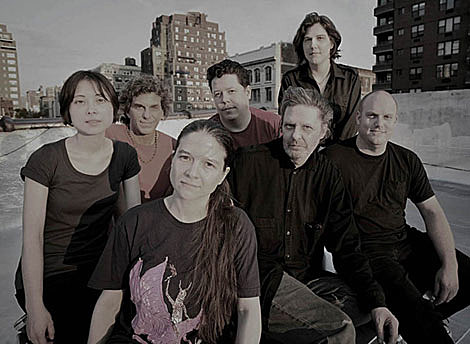 In "The Blood," played at P.S. 1 on Saturday [Sept. 5] afternoon, Glenn Branca's sextet took a little time to establish the Stomp, but after a few minutes it arrived. Most of the scores Mr. Branca has composed for his electric-guitar ensembles contain parts for bass and drums too, and the Stomp makes its appearance, as reliable as the other parts are shifting.

The Stomp is a four-four thump, straight from the garage. When the music gathers its prickly-heat tension, various guitars modulating at odds with one another and at least one playing steady drone chords, the Stomp becomes more stylized: a kind of rock habanera beat. If you have ever been shaken by some of Mr. Branca's electric-guitar music -- symphonies and shorter works -- you have depended on this beat to carry you through it.

Mr. Branca does too. When the beat showed up on Saturday, Mr. Branca, who conducted the ensemble at the head of the stairs in the courtyard of P.S. 1, in Long Island City, Queens, casually moved his hips, then his knees, locked together. Halfway through the performance he stood with legs wide apart, bluejeans cuffs rolled up, heels pumping, pompadour falling. Near the end he was slumped over, grasping the top of his music stand, rubbing his face in the score paper, still moving a leg. [NY Times]

That's a review of Glenn Branca Ensemble at the PS1 Warm Up that happened on September 5th.... which was supposed to be the final Warp Up of the summer, but now is just the second to last.

The ensemble has two more upcoming shows scheduled. One is September 11th at (Le) Poisson Rouge (tonight) with noise-punks The Paranoid Critical Revolution (which features one of the Ensemble's guitarists Reg Bloor and its drummer, Libby Fab) and excerpts from Ericka Beckman's "135 GRAND ST. 1979," a film that features performances by Theoretical Girls and The Static. Tickets are on sale.

On Saturday, September 12th (at 7pm) you can catch Glenn in conversation with Dan Graham as part of the Whitney Museum's Dan Graham Retrospective. That takes place at X Initiative (548 West 22nd Street).