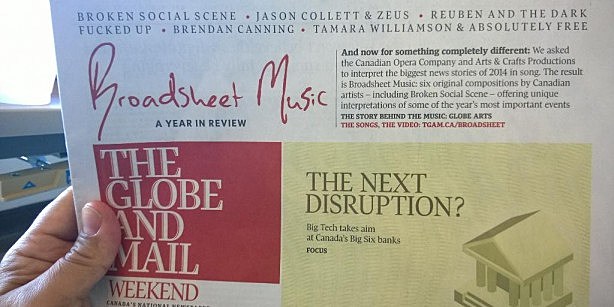 A number of readers were shocked and appalled to see profanity on the front page of The Globe and Mail on Saturday. The profanity was in the name of one of the bands involved in what was a wonderful feature called Broadsheet Music: a year in the review.

The feature on the front of the Arts section answered the question: What would the year sound like if it were music? To answer that question, The Globe approached Arts & Crafts, an independent record company, and the Canadian Opera Company. There were articles in the Saturday paper explaining how the six original compositions by Canadian artists, including Broken Social Scene and, yes, Fucked Up, were created. It also links to a multimedia presentation, where you can listen to the music that interprets the year 2014.

Photo of the paper in question via Aux.tv. Stream the 'six original compositions' mentioned above, below...