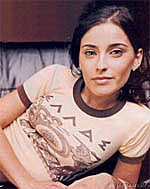 AND Ray Lamontagne is playing with Guster in Prospect Park this summer. Tickets are on sale.

AND Gnarls Barkley 'Crazy' is being taken out of circulation after sitting at #1 for 9 weeks in the UK. The single continues to chug along in the US still in the top 20 on the I tunes singles download chart. The decision to delete 'Crazy' was made to ensure that the focus of the Gnarls Barkley campaign now falls on the second single, 'Smiley Faces', scheduled for a July 17th release. Additionally, the band has confirmed they will be performing at this years MTV Movie Awards on July 8th, hosted by Jessica Alba.

AND you can download new Dangerdoom tracks for free @ Adult Swim

AND Cee-lo + Jack Splash = The Heart Attack. GVB has that MP3 that was also heard in Productshop's radio show. Pitchfork links to another track.