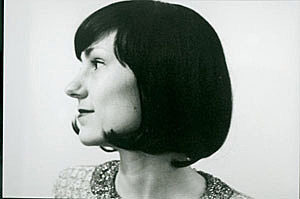 "Gnomonsong is the new record label formed by Devendra Banhart and Andy Cabic in parnership with Revolver USA. Banhart and Cabic do not push the paperwork in the label as much as work with the artists.....The label's first release was Texan singer/songwriter Jana Hunter's album, entitled Blank Unstaring Heirs of Doom, released in October 2005. The second release was a CD version of the self-titled debut of Feathers (April 2006). Releases are expected from ABRA, a NYC family band, as well as Michael Hurley and Danielle Stech Homsy." [Wikipedia]

Gnomosong will also be releasing the new Papercuts album, but I want to talk about Danielle Stech Homsy for a second. She, like Sarah Assbring (El Perro Del Mar), has a high voice and a pseudonym:

Rio en Medio is the musical adventure of Brooklyn-based singer/ukulelist Danielle Stech-Homsy......Rio en Medio's debut album for Gnomonsong The Bride of Dynamite is an intricate collage of layered vocals, delicately plucked ukulele, ghostly samples and gritty, deconstructed electronics, all performed by Rio. Final production and remixing was done by Thom Monahan (of the Pernice Brothers) at his home studio in Los Angeles aided by Vetiver's Andy Cabic. Special touches were contributed to some tunes by Andy, Sierra Casady (CocoRosie), Tim Fite and David Coulter among others.

The album is out February 5th, you can listen @ MySpace, and she has three shows coming up: