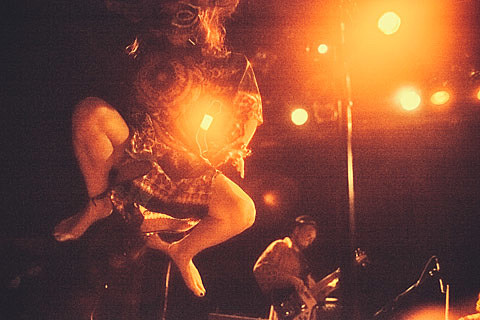 Sweden's premier voodoo disco psych band, GOAT, released a one-off single with Sub Pop last year and have now officially signed with the label. The band are currently working on the follow-up to their acclaimed debut but in the meantime have tour plans for North America. (They were here last year around this time.) They'll be over for Coachella and will play West Coast shows in between the festival's two weekends. Then they'll be back for NXNE in June and will play NYC right before, at Webster Hall on June 18. Tickets for the MHOW show go on sale Friday (4/4) at noon with an AmEx presale beginning Wednesday (4/2) at noon. All dates are listed below.

For those who need more live GOAT in their lives, the band released Live Ballroom Ritual in December via their UK label, Rocket Recordings. If you have it, take a look at the packaging. You might recognize some of the photos taken by P Squared. You can also stream a few cuts from that below.