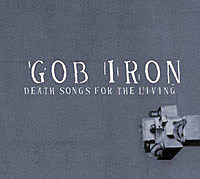 "'Death Songs For The Living', the new album from Gob Iron, a collaboration between Jay Farrar (Son Volt, Uncle Tupelo) and Anders Parker (Varnaline), will be released on October 31 through Transmit Sound/Legacy. The album features very different takes on American folk standards."

"Jay and Anders, along with Mark Spencer, will head out on tour this November and December. Anders will open the night (in support of his new self-titled LP out Oct. 31), Jay will follow with a solo set and the evening will close with a Gob Iron set."

They play Northsix in Brooklyn on November 8th, one day before Jay sings a Bob Dylan song at Avery Fisher Hall. All tour dates below...

There are presale tickets too.