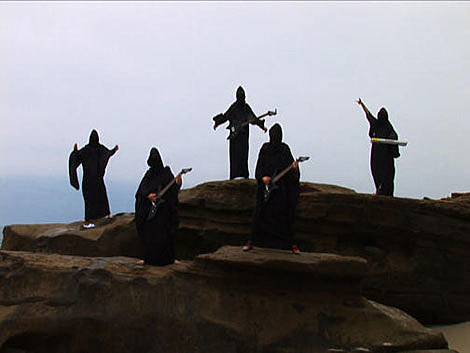 Rumored to be the brainchild of Robcore labelhead Rob Crow of indie wunderkinds Pinback, Goblin Cock is focused, primed, and ready to pull the pin on the follow-up to their mammoth debut Bagged And Boarded on Absoultely Kosher Records, which was nominated for three Plug Awards including Metal Album Of The Year.

With songs about undeniably HEAVY topics such as apparitional gloryhole afficienados, an "ode" to Native American Green Beret Vietnam War Veteran, hapkido karate Hippie Billy Jack [which rivals his own themed penned by original Satanic Black Metal Gods "Coven"], comic books [of course] and a Power-Ballad devoted to homoerotic fetish artist Tom Of Finland, Goblin Cock is taking yet another brave step in the re-defintion of TRUE METAL.

Boasting another iconic album cover by Star Wars: New Essential Guide to Characters And Magic Card artist Mike Sutfin, prepare for Lord Phallus to be the Farrah Fawcett of the 00's thanks to the foldout poster insert. Fans across the United States have already started duct taping their glasses to their heads in anticipation of the upcoming Cock Across America tour this January & February.

"No one really knows who they are.
No one knows exactly where they are from.
One thing is certain.
No one can leave a Goblin Cock show without at least a slight limp."
-William F. Buckley [probably not]