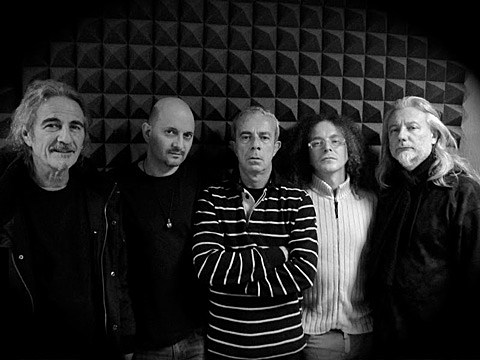 There are a bunch of different iterations of Italian prog band Goblin -- two different ones have toured the US recently -- and its hard even for superfans to keep it straight. (We attempted to here.) One of them is Goblin Rebirth which features original drummer Agostino Marangolo and bassist Fabio Pignatelli (who both played on the classic soundtracks to Zombi/Dawn of the Dead, Suspria, Profondo Rosso/Deep Red and more), plus Aidan Zammit and Danilo Cherni on keyboards and Giacomo Anselmi on guitar. Goblin Rebirth have signed with Relapse Records and will release a new album in 2015. Says the band:

It was clear to us from the start that we wanted to do an album that in some way evolved from the original Goblin sound but also took a new direction reflecting the personalities of all the band members. The pieces all fell together to make up a story that loosely describes the destruction and rebirth of a strange creature. This is itself a loose metaphor referring to the band history.

Until new recordings surface, you can watch live footage of Goblin Rebirth in Rome, below...