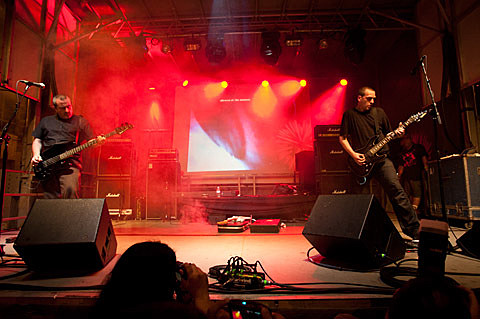 If you're a Godflesh fan, you're no doubt already aware that their long-awaited North American tour has been postponed until April 2014 because of visa issues. As promised, the new run of dates has been announced. The former NYC date that was to have happened Saturday (10/19) is now scheduled for April 10, 2014 at Irving Plaza, which is actually kind of a relief, given that NYC will still be in the throes of the clusterfuck that is CMJ this weekend. Ticketmaster's site for the date says that all previously purchased tix will be honored on the new date, which is a relief as well. The openers, however, are TBA; keep an eye out for updates on that front.

See the full run of rescheduled Godflesh dates, listed below...