Godflesh at Irving Plaza in April (more by Greg Cristman) 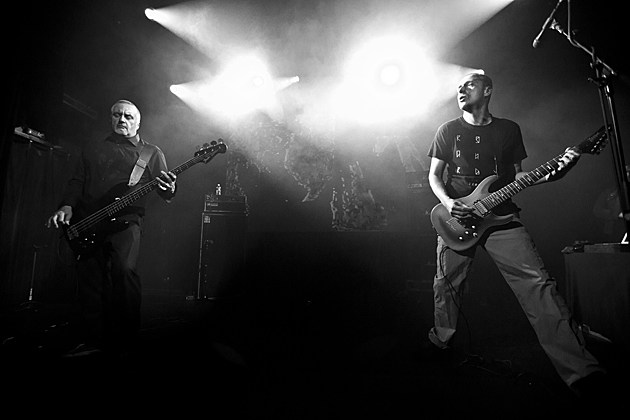 "Ringer" fits right in with their legacy, chugging with a so-them metallic plinking, countered rhythmically by G.C. Green's plucks, and given a voice via an ultra-reverbed narrator exuding detachment and seemingly stuck within the lurching machine. It may have been 12 years since the band's breakup -- not to mention a million side-projects -- but "Ringer" definitely assures that the EP's title refers to something other than Godflesh's quality.

Along with the new recordings, Godflesh have been active lately, recently going on a tour that hit NYC for an Irving Plaza show where Mr. Broadrick also gave Invisible Oranges an interview that was broadcast on the East Village Radio show (RIP, EVR).

Give the new song a stream below...

Formed with Fall of Because's leader G.C. Green in 1988 after Broadrick's stint in Napalm Death ended -- the band where the latter only helped to outline the template for grindcore with Scum's A-side; no big thing -- Godflesh took the world-ending guitars of death metal and grind and slowed the tempos to a Killing Joke type pace. Their eponymous EP and 1989's Streetcleaner innovated through hypnotic drum patterns, unrelenting torrents of distortion plus the accompanying high-volume-created overtones, and Broadrick's droning vocals.