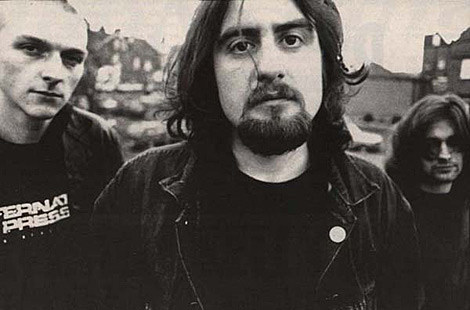 "On April 10th 2002, I disbanded Godflesh. This was something I had painfully been pondering since GC Greens' departure from the band in Oct 2001. Regrettably it took until the day of leaving for a lengthy U.S tour for the realization to finally take its toll on me.

"Unfortunately the finality of the decision and the responsibilities of making the decision proved too much for me to bare, and I collapsed under the weight. I found that without GC Green, Godflesh is not Godflesh, and him leaving proved to be an omen for me. I also feel that everything we originally intended or even imagined with Godflesh we have done....

Before Greymachine, J2 or Jesu, there was Godflesh, the highly influential industrial metal juggernaut featuring Justin Broadrick in one of his first post-Napalm Death roles (check out our interview with Justin HERE). Godflesh has announced that they will reform for a single European performance at Hellfest in France on June 18-20, 2010.

Godflesh joins the recently confirmed 16, Asphyx, Crowbar, Katatonia, Omega Massif, Sick Of It All, and the mighty Ulver as well as quite a few others who have recently been confirmed and Agnostic Front, Suffocation, 7 Seconds, Black Cobra, Weedeater, Rwake, and many more who were previously confirmed. Full (current) lineup below...