"Saw Godspeed You! Black emperor.
When they played "Moya" couldn't help myself from crying". - miniminimouse

"Godspeed the black emperor was one of the more interesting bands I've ever seen live,
really challenging and unapologetic but it works" -burnsie77

"I have never enjoyed every aspect of a show as much as Godspeed You! Black Emperor tonight! (except running out of men's tshirts) #epic" -MilanoKookee 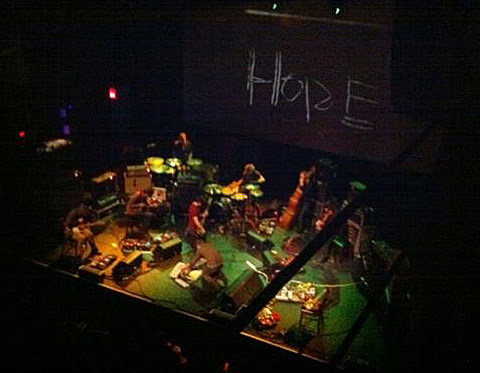 In a singles-obsessed, everybody-dance moment in music, it's astonishing that this bleak instrumental collective with songs stretching well into double-digits and no obvious frontperson still commands such devotion.

But for fans, many of whom discovered the band during the years of night-vision bombing footage from the Iraq war, Godspeed offered a kind of solace in a difficult political moment. And from the set's opening movements, off the band's standout 2000 album, "Lift Your Skinny Fists Like Antennas to Heaven," it was clear why Godspeed resonated. There's simply no other band whose members play desolation and joy off each other like they do. -[Pop&Hiss]

That review comes from the Los Angeles Godspeed You! Black Emperor show last month. The reunited and revered Canadian post-rock band played the first of a string of FIVE NYC shows last night (3/14) at Terminal 5, a trend that will continue today and tomorrow at Brooklyn Masonic Temple, and then Thursday & Friday (3/17 & 18) at Church of St. Paul the Apostle. Colin Stetson opened last night. What did you think of the show?

Check out a video from Terminal 5, some other videos, and last night's setlist, below....