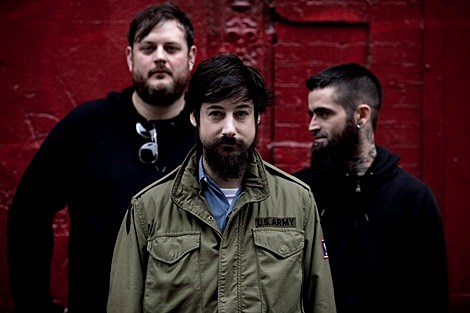 Cable will celebrate the 10th anniversary and re-release of Northern Failures with a show at Union Pool on 4/16 with Translation Loss's Slacks and Goes Cube.

Northern Failures ...ranks as the overall fan favorite. The more jagged, angular sounds of the first two records were smoothed over and a more rock and riff oriented groove crept in. Yet it still remained distinctly Cable and decidedly heavy. It was also the start of their collaboration with producer Steve Austin [of Today Is The Day]. -[StonerRock]

Goes Cube is also scheduled to play The Charleston TONIGHT (2/19) with Rosetta and East of The Wall. It's one of a number of shows for GC/EoTW. The pair will hit the road for a number of dates on their way to SxSW, including a tour kickoff on 3/5 with The Austerity Program at Union Pool. Upon their return, both bands will hit up Generation Records for an instore on March 30th. Full tour dates are below.

East of The Wall also has another NYC show this weekend with Descender, Surrounded By Teeth, and Beauty Apes at Lit Lounge on Monday (2/22). The band will release Ressentiment via Translation Loss this July; stream a pair of tracks from that record at their myspace.

Goes Cube have a new seven inch, "Property" b/w "The Ban Has Been Lifted" out very soon via The End Records. Snag yourself a copy, or try your luck at winning one of these limited edition hand-numbered joints for FREE. Details at the bottom of this post.

East Of The Wall - "Salieri" live in Chatanooga, TN