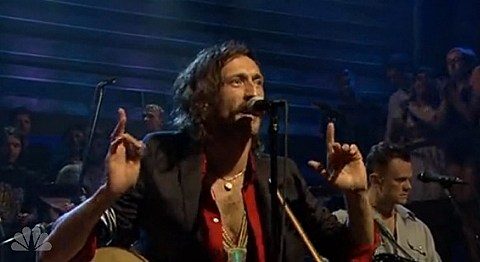 Gypsy punks Gogol Bordello are releasing their new album, Pura Vida Conspiracy, next week and, as discussed, they'll bring their tour in support of it to NYC for a sold-out show at Music Hall of Williamsburg (7/23) on the day of the album's release. Support at the show comes from A Tribe Called Red, who just produced a new Angel Haze song and were nominated for the Polaris Prize shortlist.

Around that time, they'll also be doing some in-stores in the NYC-area. The first of those happens on Monday (7/22) at one of NJ's greatest record stores, Vintage Vinyl, where we caught Queens of the Stone Age last month. If you pre-order Gogol's new album from Vintage VInyl, you'll get a wristband to gain entry to the performance. They'll also perform in NYC, not a a record store but at the SoHo Urban Outfitters ( on Broadway (7/23), 1 PM) the day of the MHOW show.

In other news, if you haven't heard Pura Vida Conspiracy yet, you can stream it at Pitchfork. And the band just appeared on Late Night with Jimmy Fallon to perform the album's track, "Lost Innocent World." Check out a video of that performance and an updated list of dates, below...