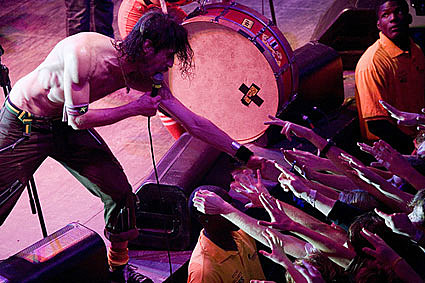 An in-demand actor — he starred in the film adaptation of Everything is Illuminated and plays a semi-fictionalized version of himself in Madonna's forthcoming directorial debut Filth and Wisdom — Hutz has charisma to burn, which he did with the public debut of his new persona, his female alter ego, a sort of she-devil in a long red wig and orange spike heels. It's a side of himself he explores in the Madonna movie, and one Hutz fans can only hope is a passing phase. It looks all wrong with his handlebar mustache. [NY Magazine]