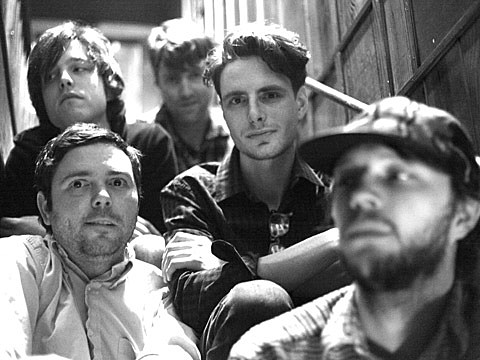 As mentioned, Atlanta's Gold-Bears will soon be releasing their second album, Dalliance, out June 3 via Slumberland. While the band get associated with indiepop, Gold-Bears definitely skew to the louder, charged-up side of that with more in common with Superchunk or The Wedding Present than The Pastels. That punkier side is pretty apparent on recently-shared track, "Yeah Tonight," which is a duet with former Standard Fare singer Emma Kupa. You can also get a real sense of their influences on a new online mixtape Gold-Bears put together which features tracks from Small Factory, The Refused, Gorky's Zygotic Mynci, Unwound and 15 more. Both the mix and "Yeah Tonight" can be streamed below.

NYC has two chances to see Gold-Bears live:  Littlefield on June 1 as part of NYC Popfest's closing day extravaganza with The Popguns, The Spook School, Colour Me Wednesday, Heathers, Pam & Bart, The New Lines, Marine Life and Lost Tapes. Tickets to that are on sale, as are four-day Popfest passes. Gold-Bears will also play Bushwick's Shea Stadium on June 3 with Rad Dreams, Hippy and Freelings.

Since we last posted, Gold-Bears have added more dates to their tour and those are listed, along with song streams and that mixtape, below...