Antony isn't the only show I missed last night. Nick Brassbonanza brings us this review of the Golden Smog show at Bowery Ballroom...

"Golden Smog are a loosely connected group of musicians comprised, at various times, of members of Soul Asylum, the Replacements, Wilco, The Jayhawks, Run Westy Run, The Honeydogs and Big Star." [Wikipedia] 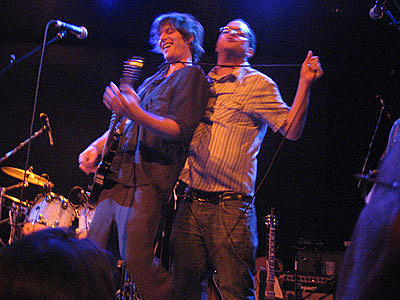 Golden Smog rocked the Bowery Ballroom last night for close to 2 hours. They ran through a set consisting of their classics, “He’s A Dick” and “If I Only Had A Car,” new(er) songs “Hurricane” and “Corvette,” and even a cover of Bowie’s “Starman.” Mike Mills of R.E.M. came out and played guitar during “Revolution Blues”, no Tweedy.

Given the options last night, the indie kids were not at this show. The average age had to be 40 years old; I may have been the youngest one there. This was clearly visible during the encore when another surprise guest came out. The opening chords of The Stooges classic “I Wanna Be Your Dog” began to pour through the speakers and then you here, “Craig, you ready!?” I look to the side of the stage and the Hold Steady front man, Craig Finn, comes crashing onstage! Everyone in the crowd was looking at each other like, “Who the hell is this guy?” I lost my mind! The energy that Finn through out could not be dismissed and he seemed truly possessed, even wrapping the mic chord around guitarist Kraig Jarret Johnson’s neck. It was by far the highlight of the night. The show ended perfectly on that high note. The Smog were indeed back, with the help of a few friends.

Tweedy wasn't at the Minneapolis one either.