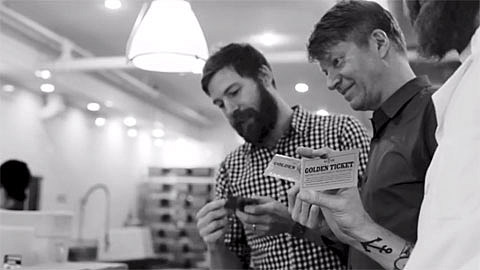 I'll let the video and press release below. do the talking, but keep your eye out for limited edition Sea Salt-flavored Mast Brothers chocolate bars while doing your shopping at the Park Slope Food Co-op this weekend!

Easthampton, MA - May 9, 2013 - Anyone who has ever attended the Solid Sound Festival knows the parallels to Willy Wonka's famed mythical chocolate factory are easy to draw. The Wilco-created three-day festival takes place June 21-23 at the playfully exotic MASS MoCA, a large-scale contemporary art museum in North Adams, MA. Over three days and nights, alongside a full and varied program of live music and comedy, festival-goers can stargaze with a noted astronomer, learn to restore an axe (the Paul Bunyan kind) and learn about birds of prey firsthand. Fittingly, the festival has now teamed with Brooklyn small-batch chocolate makers Mast Brothers to present a limited-run Solid Sound Festival chocolate bar, complete with a golden ticket prize contest.

The Mast Brothers/Solid Sound limited edition chocolate bar is Sea Salt-flavored, created by the award-winning Mast Brothers, and wrapped in custom Solid Sound paper. Only 3,500 bars were made, and they are available now through select retailers throughout the U.S. (listed below) and exclusively online at the Solid Sound Festival website, solidsoundfestival.com. Five of the 3,500 bars contain a golden ticket wrapped inside, and lucky golden ticket recipients will each receive two free three-day Solid Sound Festival passes and a chance to pick a song live onstage for Wilco to perform during the band's all-request set on the festival's opening night.

"Music has always been an essential part of our chocolate making culture, so when Wilco approached us to collaborate, it was a no brainer. We are all huge fans and have a mutual respect for each other's craft," said Mast Brothers founder Michael Mast.

Mast Brothers chocolate bars are made completely from scratch. Everything from the roasting and grinding of the cacao beans to the design of the beautiful paper that wraps each bar is done in-house at Mast Brothers' factory in Brooklyn, NY.

Solid Sound Festival is a three-day celebration of music, art, comedy and more, and it takes place June 21-23 at Massachusetts Museum of Contemporary Art in North Adams, MA. It features two nights of Wilco, including Wilco's first-ever all-requests-including-covers concert on Friday. Additional musical performers include Neko Case, Medeski, Martin & Wood, Yo La Tengo, Low, Foxygen, The Relatives, Os Mutantes and more. There is also a full program of comedy selected by John Hodgman featuring Reggie Watts, Al Madrigal and Jen Kirkman plus a wide array of all-ages programming, a live performance of the acclaimed public radio show Radiolab, an environmental documentary film festival and much more.

Solidsoundfestival.com also features information on camping, area lodging, direct Peter Pan bus transportation to and from the festival and more.

----
Wilco is also on the just-announced lineup of this year's Austin City Limits fest.