Hardly Art is an independent record label based in Seattle, WA. Founded in early 2007 by Sub Pop Records, Hardly Art is run by two full-time employees and is distributed by the Alternative Distribution Alliance (ADA) and Sub Pop. The label's name comes from a lyric the song "No Culture Icons" by [ex-Sub Pop band] the Thermals [who are in town], and the unofficial motto for the label is: Quality records for quality people since very recently. [Wikipedia]

The Hardly Art roster is now up to nine bands, the latest addition to which is Brooklyn Band Golden Triangle. 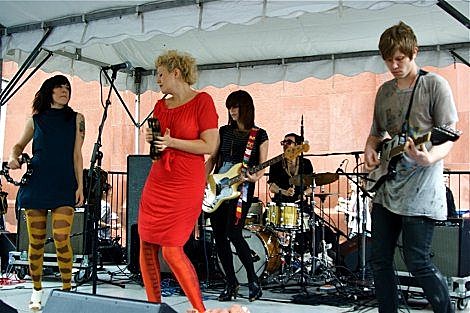 Golden Triangle's upcoming shows include a gig on Saturday, May 9th at Rubulad with the Homosexuals. The band then plays a free show on Tuesday, May 12th at Southpaw with the Phenomenal Handclap Band. They're also scheduled to perform June 12th as part of the Northside Festival (again with The Homosexuals). All tour dates below.

Earlier this year when Golden Triangle were still unsigned, the group won the Dickies Battle of the Bands down at SXSW. The judges for that included Black Bubblegum, GZA, and Randy & Dean of No Age (who, being signed to Sub Pop, are now label cousins with the winning band).

Unnatural Helpers are a pretty righteous Seattle punk band with two former members of The Catheters, an ex-Sub Pop band of which I was especially fond and whose presence on the musical scene I miss dearly. Unnatural Helpers is ex-Catheters guitarists Brian Standeford (also of Idle Times and Tall Birds) and Leo Gephardt (Tall Birds), The Dutchess and the Duke's Kimberley Morrison on bass, though the band is the brain child of Dean Whitmore, who drums and sings. [Seattle Weekly]

A new track by Talbot Tagora (who named themselves after a type of car), "Internet Fixture," is currently posted at The Fader (and above). Their album Lessons in the Woods or a City will be released July 21st on CD and LP. From the label's more established acts, new discs are also planned for Le Loup and the Dutchess & the Duke by the end of this year.

Only one other Hardly Art band has an NYC date coming up: indie-pop trio Pretty & Nice play Union Hall on May 14th with the Dig and Middle Distance Runner. Tickets are on sale.