Golden Triangle with the "W" (Photo by Van Ditthavong) 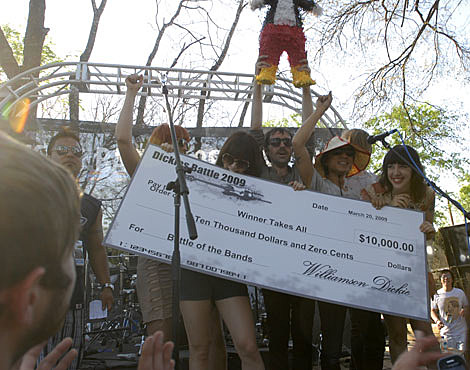 To the victor go the spoils and on 3/20 at the Dickies Battle Of The Bands in Austin, the winner was the feisty Golden Triangle and the spoils were TEN Gs of cold hard cash... or at least a really big posterboard check certifying said payment. I (Black Bubblegum) was one of the "judges" (hate that term, everything is relative) at the Battle of The Bands, along with both Randy & Dean of No Age and GZA.

The Dickies Battle was one of ELEVEN shows for Golden Triangle during SXSW, not including their appearance on stage with GZA and Black Lips immediately following their win. Four videos of that performance, which I did not stay for (more on that later), are below.

Golden Triangle are currently (back home?) in NYC, and will open for the very SXSW-busy Garotas Suecas at Mercury Lounge TONIGHT (3/24) and play with The Weakends at Don Pedro's on March 27th. A shade over a month later, April 29th, look for the crew (with shiny new instruments, no doubt) to play The Bell House as part of A Benefit for Rory O'Sullivan with Amazing Baby, White Williams, The Fugs, Acrylics, Further Reductions, Mount Olympus, George Positive, and Spiderfang (tickets here).

All videos and tour dates below...