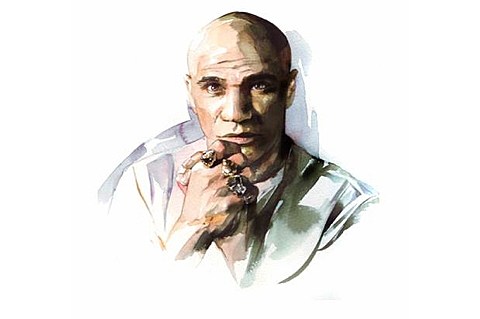 Legendary DJ Goldie had been talking about recording an orchestral version of his perfectly named 1995 album Timeless for a while now, and earlier this year he performed it with an orchestra for the first time ever during the Meltdown Festival. An official video from that performance (dir. Lyle Lindgren) is out now and that can be watched below.

Goldie's in the midst of a short US tour as we speak with two dates left, San Diego tonight (9/26) and NYC this Saturday (9/27) at Verboten with Dieselboy, Empress, Jakes, Double Dragon and Dave Shichman. Tickets for that one are available. Remaining dates are listed below.

In other news, Goldie's ex-fiance Bjork's tour documentary Bjork: Biophilia Live begins its run screening at NYC's IFC Center tonight (9/26) through October 2. Her 2013 documentary When Bjork Met Attenborough will screen at these as well. Tickets are on sale now. Then Biophilia Live will also screen in NYC from October 10-16 at Nitehawk Cinema.