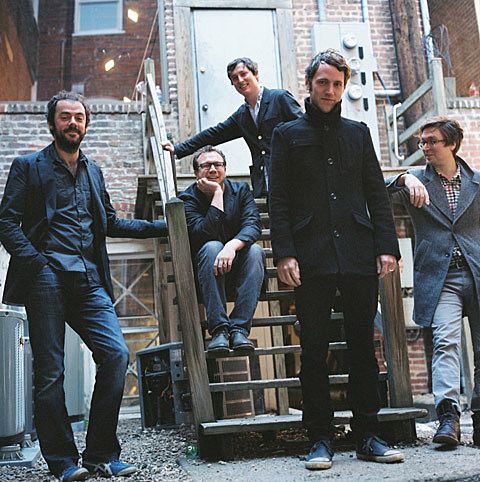 "After a brief respite from the road, we're coming back to the good ole USofA. We've confirmed a two-week run of shows in the midwest and along the eastern seaboard in July. We're kicking things off on the weekend of July 8th-10th with a couple of festival performances... [and] then head east, including a return to Terminal 5 in New York City on July 14th." - Gomez

Though the full slate of dates for Gomez's US trek have yet to be revealed, tickets are currently on fan presale for their NYC show at Terminal 5 on July 14th. Tickets go on regular sale on Friday (4/15). The Gomez dates are in celebration of the band's new LP, Whatever's On Your Mind, due this June. The band is giving away a new track for the price of your email.

At least one date on Gomez's trek (Chicago) is part of the previously mentioned DMB Caravan (thats Dave Matthews Band, for rills), a touring festival that includes a bro party in Atlantic City from June 24 - 26th at Bader Field. Though Gomez isn't on board for the NJ stop, the three-day NJ festival will feature appearances from The Flaming Lips, Damien Marley, Ray LaMontagne, Bassnectar, Dr. Dog, Fitz & The Tantrums, The Budos Band and many, many others. Full lineup is at the DMB Caravan site, and AC tix are HERE.

Based on what is posted on the Flaming Lips' own tour page, and on the Dave Matthews festival site, it looks like the Lips will not be performing a full album in NJ, though it's confusing because they will be performing "Dark Side of the Moon" at the Chicago stop (which is the same weekend they perform "The Soft Bulletin" in the same city which is also confusing). Regardless, there are still no full album shows in NYC, or NYC dates at all.

We Haven't Turned Around from Gomez