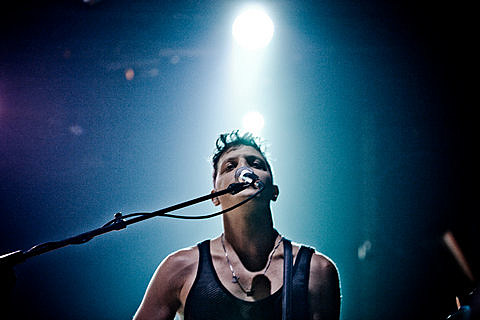 This summer in NYC is already boiling over with free shows and none of the Sunday Pool Parties at the Williamsburg Waterfront have even been announced yet (sort of). Spending Sundays at free concerts in Williamsburg is now a tradition that started a few years ago at McCarren Pool (and relocated last year to the Waterfront). Sponsors come on board to make sure the bands get paid, and we all get to spend days outdoors in a somewhat unique NYC concert environment.

There's Summerstage, Celebrate Brooklyn, and other series of shows all summer long, but none are quite like (as "hipster"?) as the Pool Parties. Until now. As previously mentioned, there will be "a new free Saturday-afternoon concert series at the Beach". Sponsored by Converse, and booked by Bowery, there's now a place to go on Saturday too. Also with bands in the day, outside and for free. They're calling it "Gone to Governors".

Between the Seaport after work on Fridays, Governors Island on Saturdays and the Pool Parties on Sunday (with alternative options in Prospect Park, Central Park and elsewhere), you can probably see slightly less than a zillion free shows this summer and be busy every single weekend day.

As also previously announced, She & Him are playing a free show on Governors Island on the 4th of July (a Sunday). That show will be considered part of the "Gone to Governors" series that now also so far includes Yeasayer on June 5th and Neon Indian on August 14th.

"All shows at The Beach on Governors Island will be held rain-or-shine. Beer, liquor, non-alcoholic drinks and food will be available for purchase. For more information about the ferry schedule, the series, artists and performances, general restrictions and rules and the latest updates and additions to the lineup, visit The Beach at Governors Island website at www.thebeachconcerts.com."

I'm also happy to announce that BrooklynVegan will be the official media sponsor of the series which will also sort of include the Local Natives show which is a pay show but on a Saturday and only $10.

You probably know or have noticed that bands don't/can't really play more than one big show a summer. Now you know where Neon Indian's is taking place. Chad VanGaalen & Avi Buffalo on the other hand are playing the Seaport. That said, Neon Indian does have two more NYC shows coming up before August.

A relevant video from Yeasayer's Webster Hall show this week, below....