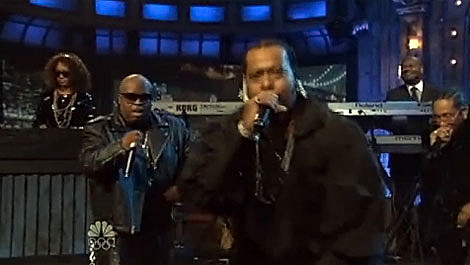 So in one way, at least, it was 1995 again at B. B. King Blues Club & Grill on Friday night, when Goodie Mob arrived, following several years of fracture, as part of its reunion tour. Around 1:45 a.m., the 1980s New York hip-hop standout and nostalgia exploiter Slick Rick left the stage after his opening set; with him went about half the crowd.

And just as in 1995, all of those people missed out. Dressed in grays and silvers, with a female D.J. in a reflective tinsel wig and matching unitard, the Goodie Mob -- Cee-Lo, Big Gipp, T-Mo and Khujo -- were exuberant and comfortable, happily taking their rightful place as oft-overlooked pioneers. [NY Times]