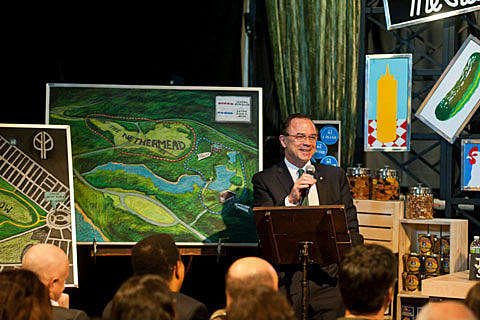 ---
A PRESS RELEASE TO HELP MINIMIZE CONFUSION ON HOW THIS ALL WORKS:

April 23, 2012 - New York, New York - Superfly Presents is excited to announce the music line up for The Great GoogaMooga, the highly anticipated food, drink and music festival set to take place in Brooklyn's Prospect Park on May 19 and 20, 2012. Like a great chef decides upon the perfect food combination and then picks the ideal wine to go along in order to create the ultimate meal, Superfly has curated the music to complement the unprecedented food experience that is GoogaMooga. It is a line up that has something for everybody -- from soul to gospel to jazz to punk to indie rock and even cover bands - and the thread connecting it all is that each band is upbeat, fun, and brings the party to wherever they perform.

"Food and drink are the headliners at GoogaMooga, but we couldn't imagine a festival experience being complete without some fantastic music to support," said Superfly Co-Founder Kerry Black. "We wanted to find a great mix of styles that catered to Brooklyn's diversity."

While attendees will flock to experience their favorite restaurants and superstar chefs, and hopefully experiment with some purveyors they've never heard of before, they'll also be able to hear music from some artists they know quite well and others that are equally fantastic though perhaps unfamiliar to them. Confirmed so far are: Philly soul legends Daryl Hall & John Oates, the irrepressible Motown/Stax-influenced Fitz and The Tantrums, the electro dance magic of Holy Ghost!, the national treasure from New Orleans known as The Preservation Hall Jazz Band, funk and R&B master Charles Bradley & His Extraordinaires, the Havana-born, New York-based conga sensation Pedrito Martinez, the modern take on disco by Escort, the soul church sounds of Naomi Shelton and the Gospel Queens, the noisey indie-pop of Bear Hands, the kaleidoscopic psych-beats of Portland, OR's Unknown Mortal Orchestra, the all-female Led Zeppelin cover band Lez Zeppelin, the Japanese atomic comic punk band Peelander-Z, and Fort Lean and Lucius, two young, critically acclaimed Brooklyn-based indie rock bands.

Superfly wanted to have bands perform at The Great GoogaMooga that had direct connections to the local Brooklyn community. Both Shelton and Bradley are on the acclaimed Brooklyn-based Daptone Records, while Holy Ghost!, Escort, Bear Hands, Fort Lean and Lucius are all starting to make a name for themselves in the thriving Brooklyn indie rock music scene.

Spanning across the park's Nethermead area and making for the ultimate sensory experience, GoogaMooga will host approximately 75 restaurants & vendors, 35 brewers, and 100 wines. Helping to power the food experience, Googamooga is excited to announce a special partnership with Seamless (www.seamless.com), the nation's leading mobile and online service for ordering delivery and takeout food. Through the partnership, Seamless will power the festival's online restaurant pages, host culinary & technology panels onsite within Googamooga's Restaurant 101 stage, and bring their Craved Awards to Googamooga, giving guests a chance to vote for their favorite festival dishes.

General Admission at GoogaMooga is free but attendees must register to obtain a ticket to the event; concessions in General Admission are priced individually. With Extra Mooga, GoogaMooga's all-inclusive paid ticketed experience, guests have exclusive viewing of the Main Stage shows and access to 20 different events per day, ranging from music to comedy, culinary seminars, cocktail demos, wine and beer tastings and theme parties.

The complete artist line up for The Great GoogaMooga is below:

More artists will be announced soon.

I still have no idea how it works.