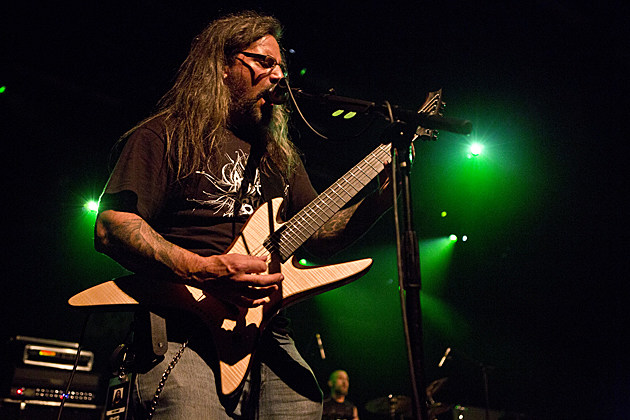 Great news for death metal fans today, as Montreal prog-death institution Gorguts have debuted a new track and announced a new album called Pleiades' Dust, which comes out May 13 via Season of Mist. The album is actually one long composition, which definitely marks new ground for Gorguts, and the track is actually just the first 5 minutes or so of the composition. The section is called "Wandering Times," and it's a typically dense, furious, knotty piece of death metal, whetting the appetite for what will come next.

Gorguts' driving creative force and sole constant member over the years has been Luc Lemay, but this is the second straight album (after 2013's fantastic Colored Sands) that has featured Dysrhythmia's Kevin Hufnagel on guitar and Krallice's Colin Marston on bass, and the continuity is already evident on the new music. It's the first time where Gorguts sounds sonically like the same band on two consecutive albums, and the prospect of these guys stretching their legs over a massive composition like this is exciting.

Stream "Wandering Times" below (via Stereogum), and pre-order Pleiades' Dust over at Season of Mist.