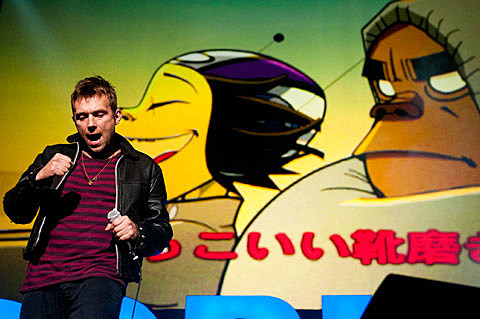 Gorillaz will be back in 2016, according the group's visual designer, Jamie Hewlett, who told DIY they're in the early stages now:

I don't want to say too much about it, but I'm at that phase of experimentation. What I try not to do when I'm working in this creative period, the cooking of the mess, is go to other peoples' exhibitions and look at other peoples' work. I close my eyes, and don't want to know what anyone else is doing. Doing that has kind of ruined the creative process for me in the past, and I don't want to let that happen again.

Stay tuned for more details on that. Gorillaz' last studio album was 2010's Plastic Beach (not counting the one Damon made on his iPad). Meanwhile, Damon Albarn will be in NYC soon when Blur play Madison Square Garden on October 23 with opener Courtney Barnett. Tickets are still available and we're giving away a pair as well.