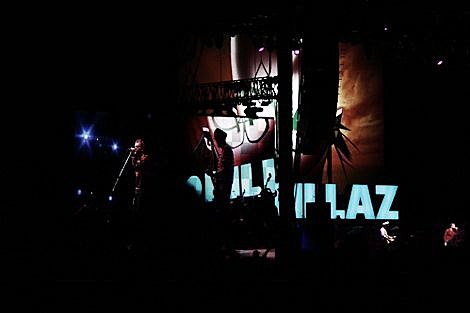 "With blown minds still reeling from a record-breaking one-off headline appearance at this year's Coachella festival, Gorillaz have confirmed that their worldwide "Escape To Plastic Beach" tour will begin in North America with a 20 date stretch commencing October 3 at Montreal's Bell Centre and including the band's first ever performance at Madison Square Garden on October 8."

Gorillaz fanclub, the Sub-Division, will benefit from a 48 hour pre-sale ahead of tickets going on general sale. To join Sub-Division go to www.gorillaz.com/subdivision

The U.S. and Canada dates, full details of which will be announced shortly, will be followed by a series of 10 shows across Europe and the UK, including a two-night stand at London's O2 arena, as well as seven shows across Australia and Asia.

Gorillaz co-creators Damon Albarn and Jamie Hewlett's new live experience encompassing material from all three multi-platinum Gorillaz albums played its first ever show at this April's Coachella festival, absolutely slaying a crowd of 70,000 in the final headline slot of the weekend. Featuring Albarn, Mick Jones and Paul Simonon of The Clash, Bobby Womack, Little Dragon, Bootie Brown, UK Hip Hop stars Kano and Bashy and others as well as video animation, artwork, film and stage design by Hewlett, Gorillaz have since played in front of more than 400,000 fans headlining Glastonbury, Roskilde in Denmark and Benicassim Festival in Spain and will soon become the first Western band of their magnitude to play in Syria when they play the ancient Citadel in Damascus on July 25th following a headline slot at Byblos Festival, in Beirut, Lebanon.

On the heels of the recently released third Gorillaz album Plastic Beach being voted #1 album of 2010 thus far in NPR's listeners poll, and first single/video "Stylo" setting the record for the most successful YouTube Music Tuesday premiere ever, Gorillaz have followed up with an epic clip for "On Melancholy Hill." The narrative reveals the whereabouts of Gorillaz guitar slinger Noodle, making her first appearance since her apparent demise in the "El Manana" video that capped the 2005-2006 Demon Days campaign, and drummer Russel Hobbs, returning from MIA status transformed into a giant. "On Melancholy Hill" also picks up immediately following the conclusion of the white knuckle chase captured in "Stylo," with Noodle's Cyborg doppelganger, Murdoc and vocalist 2D headed to Plastic Beach by way of an undersea odyssey featuring cameos from Lou Reed, Snoop Dogg, Simonon and Jones, De La Soul and more. The full back story of the various Gorillaz misadventures filling the gap between Demon Days and Plastic Beach, the discovery of Point Nemo and construction of Murdoc's new HQ, the formation of the current Gorillaz live band and more are chronicled in Journey To Plastic Beach http://www.hulu.com/watch/158164/gorillaz-journey-to-plastic-beach#s-p1-sr-i0. Journey To Plastic Beach recently debuted alongside "Feel Good Inc.," "DARE," "Clint Eastwood" and other visual essentials from the extensive Gorillaz videography at the band's recently christened Hulu channel at http://www.hulu.com/gorillaz

Plastic Beach was released March 9 in the U.S. on EMI's Virgin Records. It immediately set two career landmarks, selling more than 112,000 copies in its first week and entering the U.S. album chart at #2. Both career highs, the sales number and chart position bested those of 2005's double-platinum Demon Days, which sold 107,000 in its debut week, entering the chart at #6.

Gorillaz a/k/a Murdoc Niccals, 2D, Noodle and Russel Hobbs were co-created by Albarn and Hewlett over ten years ago, and unleashed on the world with their self-titled 2001 debut album, which has sold nearly two million copies in the U.S. The band's 2005 follow up, Demon Days, featured the Best Pop Collaboration with Vocal Grammy winner "Feel Good Inc." and sold in excess of two million copies in America.