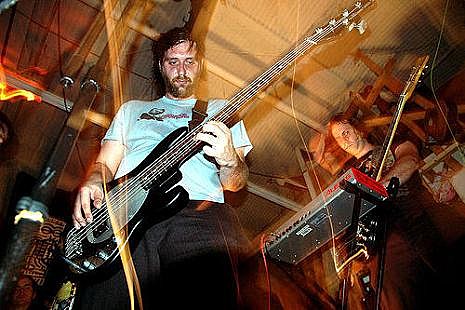 New York City post-hardcore act Gospel push the avant-garde tip of a genre already considered to be on rock's cutting edge. ...By 2003, the songs they were writing had evolved into art rock realms, drawing on everything from math metal to ambient music to space rock, and necessitated the addition of Jon Pastir (guitar, keyboards) to make it all work, both in the rehearsal room and on-stage. This led to their renaming themselves Gospel, and in 2005 they released their first full-length work, cryptically titled The Moon Is a Dead World. Late the next year, the band announced it was breaking up, though no reason was given. - [Allmusic]

Gospel's prog/emo/post-hardcore magnum opus The Moon Is a Dead World still strongly resonates today. Luckily, that "break up" didn't take, as the band has announced that they've written "an album's worth of new material" and will perform that at a show at Union Pool on 1/29 with Drunkdriver and Tournamentas part of a benefit for the ailing Matty No Times of Three Kings Tattoo. Some of that new material is streaming at their muxtape site. You can download a few tracks from The Moon Is A Dead World above.

Tournament is also scheduled to play NYC with Coalesce / Coliseum / A Storm of Light at Europa on 12/30. Get yr tix.

Dig on a bunch of video of Gospel below...

Gospel - "What Means of Witchery"