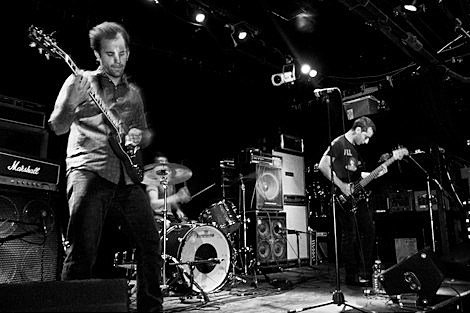 The city is always brimming with great art, whether from MSG to a loft in Bushwick. Here are some more NYC shows that are definitely worth a look over the coming weekend...

Descender recently played Mercury Lounge with Vagina Panther, and now the band is on and poppin' for a new show on Fri (1/29) at Trash bar with Bearface and Forward/Backward. Dig on two videos from Mercury below, or you can download the entire appearance (in audio) for free. Descender is also scheduled to play Lit (assuming it still exists) on 2/22 with the great East of The Wall.

A kick-ass four band bill of Vaz (ex-Hammerhead) will team up with Animal, STATS and Teething (ex-MAW) at Death By Audio on Fri (1/29) after moving from the previous venue, Old Made.

Quick reminder, Gospel hath been resurrected on 1/29 (Friday) at Union Pool with Drunkdriver and Tournament. The show is a benefit for Matty No Times of Three Kings Tattoo, so get out to an awesome show for a great cause.

Psychic Limb will play PS1 this weekend (on 1/30) as part of their Saturday Sessions. The show kicks off at 4PM and is entitled "James Cameron, Reel World: a James Cameron Retrospective". More details can be found at PS1.

Public Assembly will host a new metal/noise monthly entitled Zona, which kicks off this Sunday with great lineup of White Suns, The Austerity Program, Daniel Malinsky, and Immanent Voiceless. $7 will get you in the door for the 8PM show.