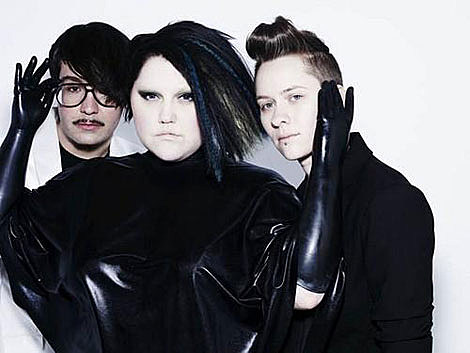 It feels like a while since we've heard from the Gossip. The Beth Ditto-led band are releasing their fourth studio album, Music For Men, on June 22, 2009 in the U.K. and digitally on June 23, 2009 in the U.S. via Columbia Records (in stores here October 6). You can stream the whole Rick Rubin-produced LP, right now, at AOL.

[Gossip guitarist] Brace admits that the band's experience cutting Music For Men at Shangri-La Studios in Malibu marked "the first time we ever had access to a studio like that. I can see if you let a musician loose in this big studio to just ride all this stuff, I can see why somebody would just come up with this huge thing. Having restraint was so important. I hate the over-production sound."

"We wrote a lot of this album in the studio," Brace continues, again referring to Shangri-La. "The Band built it in 1976 and Bob Dylan's old tour bus was in the back. It was empty so I turned it into my own little studio with my computer with GarageBand and my guitars and stuff. I loaded up all my gear into Bob Dylan's 70s tour bus and that's where I wrote. Beth would come in and I would play her demos. All the vocal lines are hers, the lyrics are hers. I do the sounds and she sings over it. She'd come in the Bob Dylan bus and we did a lot of demoing on our own during the day because it was more comfortable. She'd come in and sing into GarageBand. I'd write some things to her vocals. 'Dimestore Diamond' was actually her humming the song and I started playing bass to it."

The band will spend the summer touring Europe to promote the release there. They return here for shows around the time the physical CD is released, and that includes an October 9th show at Terminal 5 in NYC. Tickets for that show go on AmEx presle at 11am today (general sale starts Friday).

The rest of the North American dates haven't been announed yet. European dates, new album tracklist, and their new video for "Heavy Cross", below...