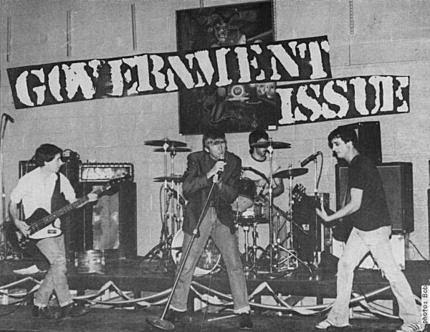 Government Issue was an American hardcore punk band from Washington, D.C. active from 1980 to 1989. The band experienced many changes in membership during its nine-year existence, with singer John Stabb as the only consistent member in an ever-fluctuating lineup that at various times included notable musicians Brian Baker, Mike Fellows, Steve Hansgen, J. Robbins, and Peter Moffett. Government Issue originated from the Washington, D.C. hardcore scene but added elements of heavy metal, New Wave, and psychedelic rock on later records. Though this has caused the band to be sometimes overlooked in relation to other Washington, D.C. hardcore acts, their stylistic diversity made them influential to later punk rock groups. -[Wiki]

Government Issue will reunite for a single show in DC at The Black Cat on December 11th with The Goons and Set To Explode, their first show in 21 years. The band, which will feature John Stabb, J. Robbins, Tom Lyle, and Pete Moffett, will play the venue as part of a benefit for DJ Stereo Faith (aka Steven McPherson of the defunct DC band Brace), a local DJ who is recovering from removal of a tumor from his auditory canal. Tickets are on sale. If you can't make it to the show, you can paypal donations for Steven McPherson to keepingthestereofaith (AT) gmail DOT com.