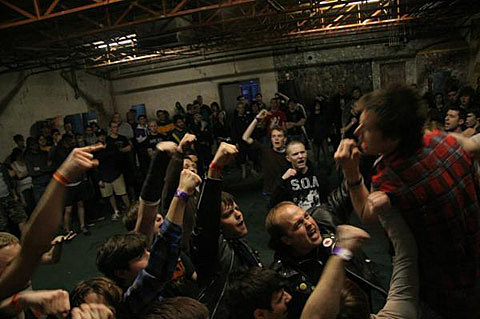 Tons of great hardcore and punk shows in the coming months!

Richmond hardcore rippers Government Warning will hit the road for a string of dates with Night Birds in late February, hitting NYC for a pair of shows on Feb 19th. The day of old-school hardcore madness begins at an early show at Cake Shop (5PM) with Perdition and Ex-Humans and continues into the wee hours at a late show (11PM) with 0megas at 538 Johnson, # 201. Full tour dates are below.

As previously mentioned, 108 teams up with Ensign, Incendiary, and Torchbearer at Cake Shop at 3PM on Saturday (1/08, yeah I know). Tickets are still available, but this 21+ show WILL sell out. As a result, 108 has added a second ALL AGES show at Death By Audio with Primitive Weapons, Heavy Breath and Black Kites that will kick off at 9PM. No advance tickets, and $10 gets you in.

And now for all of you who missed them on their first go around, you're in luck. Tear It Up have reunited and will play Europa on March 25th with Last in Line & The Cell Mates.

Since forming out of the ashes of Dead Nation in 2000, Tear It Up has become a mainstay of the American DIY hardcore scene. Their aggressive fast hardcore sound and intense live performance won over legions of fans from the start. Tear It Up toured the US and Europe constantly, and when not on tour still played as many as 4 shows a week anywhere within a days drive of their native New Jersey. Tear It Up survived several line up changes most notably Paul went on to form Cut the Shit and John was drafted from Down in Flames. Tear It Up broke up shortly before [their final record Taking You Down With Me] was released... Let it be known that Tear It Up went out at the top and never put out a weak record or put or a lame half hearted show.

Tickets for the Brooklyn show are on sale.

Most Precious Blood are back, and will play Cake Shop on January 30th with Suburban Scum & Spectators. Advance tickets are available now.

The previously discussed 'Steve Ignorant plays Crass' show at Santos Party House on March 10 has added Leftover Crack and Thulsa Doom to it's ranks. Tickets are still available. Leftover Crack played Music Hall of Williamsburg on the day after Christmas 2010, but not with Bouncing Souls in Asbury Park that same week.

Reverend Horton Heat has a pretty impressive set of tour dates laid out for the first half of the year, and one of thise is scheduled for The Bell House on May 6th. Tickets are on sale. Full tour schedule is below.

Supertouch has reunited, and will play Santos on Feb 12th with Sweet Diesel. The show originally had 1.6 Band on the bill, but they have since been removed. Tickets are on sale.

Reagan Youth will team up with Yuppicide, Beer & Cable, and Agitator to play Europa on January 23rd. Tickets are on sale.

The Brooklyn venue will also host a monsterous hardcore lineup two months later featuring Urban Waste, Ultra Violence, Step 2 Far, Down Low NYHC, Darkside NYC, Kincaid, Fed Up, Caught In A Trap, Chesty Malone & The Slice Em Up's, Not Without A Fight, Sexual Suicide, Olde York, and Yo Scunt. The March 26th show will begin at 1PM and tickets are on sale.

Tour dates and some video below...

Tear it up - Close my eyes and hope for the worst