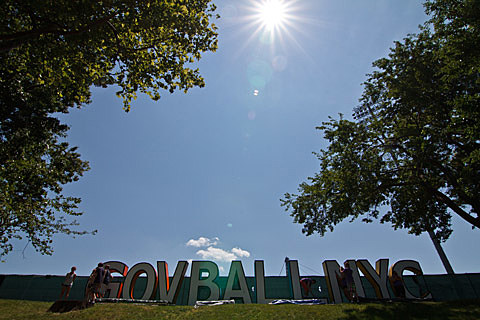 Though Guns N Roses being announced as the third headliner and related "YOLO" Facebook messages were the most discussed and controversial topics when one of NYC festival Governors Ball's promoters hopped in a Reddit chat yesterday (4/3), we also learned that: Miguel dropped off the festival; the promoters were trying to land Atoms for Peace (whose tour instead brings them to NYC for a Barclays Center show on 9/27); Cut Copy and Kendrick Lamar are playing at the same time on the Saturday of the fest, and there are unannounced afterparties. "Stay tuned for epic shows at Brooklyn Bowl, MHOW, Gramercy, Glasslands, and Irving Plaza." That quote and more over at Reddit.

Governors Ball goes down on Randall's Island from June 7 - 9 and also includes a number of other artists like Kanye West, Nas, Grizzly Bear, The xx, Feist, Beach House, Animal Collective, Erykah Badu, Death from Above 1979, Crystal Castles, Best Coast, Dirty Projectors, DInosaur Jr., Japandroids, Alt-J, Deerhunter, Fucked Up, and many more. 3-Day passes are still available and tickets for individual days are now on Friday (4/5) at 11 AM.

Meanwhile you can catch Guns N Roses tribute band, Mr. Brownstone (no stranger to the pages of BrooklynVegan) at Brooklyn Bowl on May 18 (tickets).

We recently gave you a list of artists we're excited to see at the festival, and though that list already included Deerhunter, we're even more excited to see them after their recent Fallon performance. If you missed the awesomeness of that (which also included debuting their new single, Monomania), you can watch the video below.