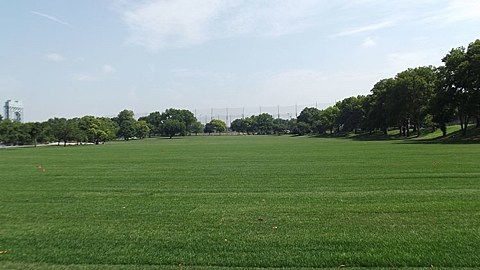 Back in June, the people behind Governors Ball said they'd be helping to restore Randall's Island, which was left as a giant mudpie after the festival. The restoration (as you can see above) is complete, and the following statement has been given:

The Governors Ball Music Festival is proud to announce the completion of restoration efforts at Randall's Island Park's Event Site to repair the grounds. Governors Ball is making good on their stated goal of leaving the park's event site in even better condition than it was before this year's sold-out festival, which was hit by record rains at the start of the June 7th-9th event.

Governors Ball is honored to call Randall's Island Park home, and as New Yorkers themselves, the festival promoters at Founders Entertainment are especially dedicated to preserving and maintaining New York City's cherished public spaces. At the conclusion of this year's festival they immediately assumed responsibility for the cost of the restoration work, which included fully scraping, rototilling and then sodding the event site with 9 acres of hearty Kentucky Bluegrass. No time was wasted in this effort, and as soon as turf conditions were dry enough for restoration to go forward, work began. Founders contracted with DeLea Sod Farms, one of the most prestigious local sod and grass companies, for the project. Their long list of esteemed clients include the New York Yankees, among others.

In addition to field restoration, Governors Ball has invested in infrastructure improvements to the Randall's Island Park Event Site that will prevent future flooding and event site damage, including the installation of a drainage system on the west side of the event site. The investment will make the site more functional and better protected from future weather events. The move demonstrates Governors Ball promoters Founders Entertainment's long-term commitment to the park New York City's premier live music event calls home, and their dedication to protecting and preserving the event site so that it is available for all New Yorkers to enjoy for the months and years to come.

"Randall's Island Park is such a beautiful public space, and after this year's record rainfall resulted in lost grass and excessive mud in the event area, we knew immediately we had to restore the event site and leave it in even better condition than it was before Governors Ball took place. As New Yorkers who grew up going to Randall's Island often for sports, concerts, and other special events, the restoration wasn't just an ethical responsibility, it was a personal one. We have worked hand in hand with the Randall's Island Parks Alliance Turf Crew and the NYC Department of Parks to make sure all the work meets their professional standards. We are thrilled with the results, and we can't thank them enough for their support, and hard work throughout this process."
- Tom Russell, Yoni Reisman, and Jordan Wolowitz of Founders Entertainment