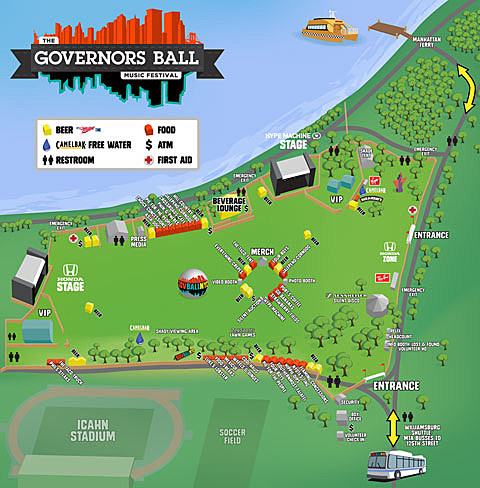 As mentioned, Governors Ball goes down in NYC this weekend on Randall's Island from June 23-24. You can check out the full schedule for both days HERE. The lineup includes a number of bands who haven't played NYC in a while, like Passion Pit, who have a new LP coming out which you've heard two songs from; Modest Mouse, who also play the Metallica-headlined Orion Music & More festival in Atlantic City this weekend, Beck, Devendra Banhart, and more.

Fiona Apple did play in NYC pretty recently, but those shows were her first in a while and were also small venues for her and sold out instantly. Fiona also just finally released her new album and it's great, which is all the more reason to catch her set this weekend. She also recently announced a ton of new dates and performed on Fallon with the Roots.

Other bands playing include Built to Spill, Explosions in the Sky, K.Flay (who also plays Glasslands on 7/13), James Muprhy & Pat Mahoney DJ Set, Cults, Phantogram, and still many more. In addition to the music, there will be some other activities like ping pong, beer pong, silent disco, lawn games (bocce ball, croquet, etc), and from looking at the weather forecast, probably the most important of them all: free water refill stations. Tickets for the festival are still available.

Shuttles to the festival from Brooklyn and Philly are sold out but regular ferry tickets ($25), and parking passes if you plan to drive are still available. If you are heading down there by car, subway, bike or foot, here are some directions from NYC, Long Island, Westchester, and Jersey. Once you've found your way there, this map should help you get around the festival grounds. Leave your nunchucks at home.