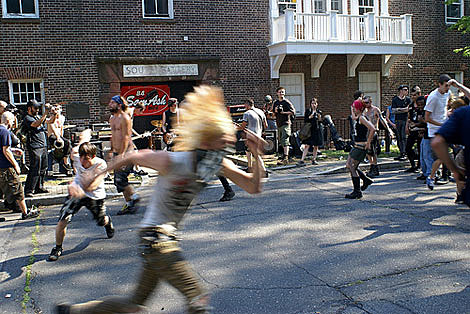 Make Music NY 2009 is happening around New York City on Sunday, June 21st. The free, outdoor-music event will turn street corners, sidewalks, and parks around the city into one-day music venues. One of those spots is Governors Island, where MMNY will again host a "Punk Island" lineup. Announced bands for 2009 include '80s hardcore punk band Reagan Youth (who played last year's event), Blanks '77, and "dozens more" to come.

Both bands are also scheduled to play the Underground Revolution Fest on May 22nd - 23rd at the Gramercy Theater, though no ticket info for that still.

Governors Island is also home to a new concert spot dubbed The Beach at Governors Island. The Highline Ballroom, who also three shows on the island last year, is presenting the first scheduled show at the location -- Dark Star Orchestra, Keller Williams, Pete Francis and Barefoot Truth on July 11th. Tickets are on sale.

Also planned again for Governors Island this summer is Folks on the Island, a series of folk concerts, one of which will be headlined by Judy Collins on Sunday, July 26th.

"Punk Island" videos from last year, with hours and directions for Governors Island, below...

Directions to the Governors Island Ferry

The Governors Island Ferry departs from the Battery Maritime Building located adjacent to the Staten Island Ferry in Lower Manhattan. The ferry terminal is accessible as follows: