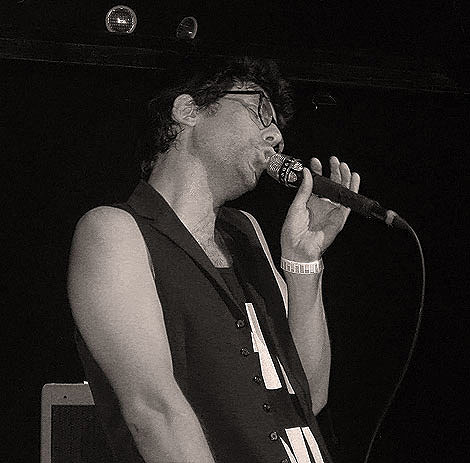 Following a great first day at Electric Zoo, I somehow found the energy to head to Le Poisson Rouge to see Jamie Lidell who was performing in one of the many celebrations for Warp's 20th Anniversary (9/5). While Jamie was alone, without any of his bandmates that typically make up the live Jamie Lidell experience, simply armed with a couple of laptops, a mixing board, and some other items indiscernible from the crowd's side of his table of gear...he put on an excellent show. While the set was stripped down, without all the bells and whistles that come with a live band, the solo set-up allowed Jamie's talent, both musically and as a true entertainer and showman shine through.

He opened with the track "What Is It This Time?" off of Multiply before turning to the table of gear which he was behind for much of the set. While I'm not sure if he was playing specific older tracks with which I am not familiar, or if much of it was improvised/experimental, Jamie poured over the equipment, beatboxing, recording and looping vocal snippets, only to sing over and loop them again, tweaking nearly every sound that emerged from behind that table. While more abstract, experimental pieces can sometimes be a bit too out there for a listener of an artist's more everyday fare, the intensity and passion with which Jamie performed, combined with everything sounding amazing, made the show engaging regardless. He sang a few more songs including "When I Come Back Around" and "Music Will Not Last" the latter of which he dedicated to Warp, which he spoke of fondly multiple times during his set. The set finished with a slowed down, much more electronic-oriented version of "Another Day", the perfect ending to a show that combined elements of Jamie Lidell's style both past and present. 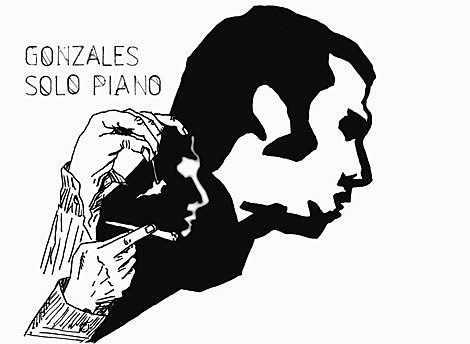 Jamie Lidell is from England and resides in Berlin, but this month he might be staying in NYC because there are now two more chances to catch him here before September is over.

We've long followed the collaboration between Jamie and his Canadian friends Feist and Gonzales (and Mocky), but we don't hear much about Gonzales here in the U.S.A. That should change soon. On September 22nd, Arts & Crafts is re-releasing Gonzales's Solo Piano album "as a special deluxe edition- It comes complete with a DVD bonus disc, featuring the documentary 'From Major To Minor' as well as various other entertaining visual complements." One day later, Gonzales kicks off a four day North American tour in LA. From there he goes to NYC for TWO September 25th shows (early and late) at Joe's Pub. Jamie Lidell will be at both of them, and tickets are on sale.

Gonzales may be best known as the producer of Feist's Let It Die and The Reminder. Feist is known lately for playing 'special guest', and her last such appearance just took place at a NYC show on September 10th. So who knows, maybe she'll be there too - the Joe's listing does read that Gonzales will be "Accompanied for each show by unexpected (or expected) guests from the gang".

In related news, Gonzales recently launched a sitcom, filmed in Paris, "Superproducer", and entered the Guinness Book of World Records for longest solo performance - over 27 hours (in June). A picture of him with his award and all dates below... 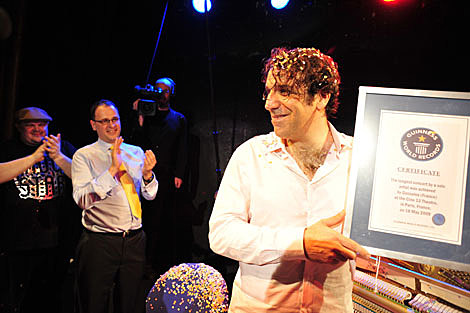