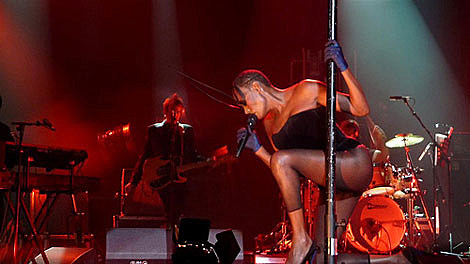 "[My 2008 album] Hurricane was an accident. Blame it on Ivor Guest. I'd decided never to do an album again. Record companies today don't allow artistic freedom, and I just couldn't be bothered anymore. But when Ivor brought me the music to 'Devil In My Life', from there we had a creative chemistry and the music just flowed. We followed where my voice was taking the music and where the music was taking my voice. We didn't work to some industry formula of what the Grace Jones sound is. It doesn't matter that it's taken twenty years because me and the music are always in the same place. It doesn't sound like the past or the future. It sounds like now, whenever now is. I don't count. Quality surpasses quantity at any time." - Grace Jones

First Kylie Minogue, then Pet Shop Boys, and now Grace Jones has announced a show at NYC's Hammerstein Ballroom. The July 30th gig is one of just of two appearances the multi-talented artist will be making in the United States. The other is July 26th at Hollywood Bowl with Of Montreal and Dengue Fever. Tickets for the NYC show are currently on "Live Nation presale" (password?) and go on general sale on Friday at 10am. Tickets for the LA show are on sale now. All dates below...