"I do not understand how anyone not named Grace Jones was ever allowed to think of themselves as "fierce." - Sasha Frere-Jones 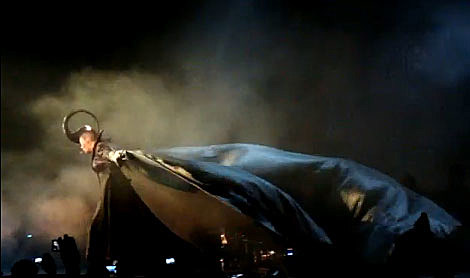 I skipped Jarvis and the Diesel thing (Kanye West played one song with Clipse) last night (7/30) in favor of checking out Grace Jones at Hammerstein Ballroom (there was time to go to Webster Hall after Hammerstein actually, but I wasn't in the mood).

Possibly more than the music, video, lights and special effects, a Grace Jones show is about her outfits. The whole thing ran about 90 minutes, and she changed at least 10 times (I lost count). While she changes, she talks to the crowd from a mic back stage (except for before the encore when the change break was also the encore break). Each outfit was over the top and caused the mostly-gay-men crowd to cheer loudly. Each outfit ranged in the degree to which they revealed the 61 year old diva's in-shape body.

She had one especially memorable all-red, dress-like outfit that came out far on both sides of her - making her into a big circle, and making her somewhat immobile (like the kid in Christmas Story) during the song she had it on for. She sang most of that song facing the front in all her red glory. At the end of it she started spinning which revealed that, though the front was a giant explosion of red, her back (head to toe) was basically naked save for the g-string/strap that was holding the whole thing on. I wasn't super close to the stage, so I may be describing it slightly wrong.

For "Hurricane", the title track of her new album, she whipped out this giant cape and sang towards a fan so the cape could blow in the wind (no, the cape wasn't the only thing she had on) (see above). There's a good video of it, below...

Pictures and more about this show coming soon.