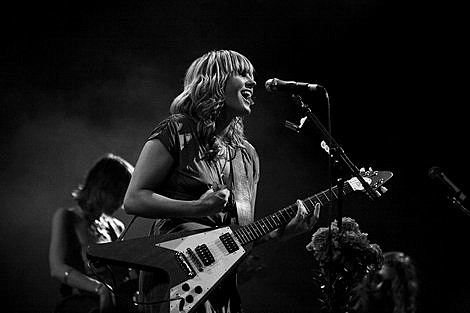 Weekly Davespeak: I understand you have another album planned with T-Bone [Burnett] this year..

Grace Potter: Actually, we've already finished the record. We were in L.A. for a little under two months. We recorded the entire album in a very amount of time. It is coming out in October.

That T-Bone Burnett-produced album, Medicine, is set for an October 27th release on Hollywood Records.

The band will be on tour with Brett Dennen this fall. That jaunt includes a November 20th show at Terminal 5. Tickets for the whole tour are on presale now. Tickets for the NY show are also on AmEx presale. General sale starts September 11th at noon.

The band has post-tour plans for a four-night New Years Eve run in their homestate of Vermont, a January gig at Levon Helm's Midnight Ramble in Woodstock, and a show after that in Jamaica (not Queens) with Gov't Mule (Grace is very popular in the jam band scene). All upcoming tour dates are below...