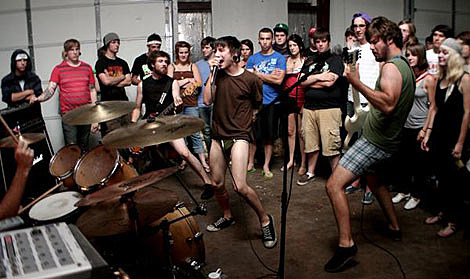 What do you get when you cross a metal band with a serious case of ADD and multiple personality disorder, spazzy-grinders with a Point Break fetish, and a crew from a whale's vagina with a Deathwish? A f'n good show, that's what!

Wetnurse, Graf Orlock, Lewd Acts, and 26 Beers will redline the RPH meter (that's riffs per hour) when they team up to destroy The Charleston in Brooklyn on Sunday Jan 18th. The shindig kicks off at 9.

Graf Orlock and Lewd Acts are in the midst of an East Coast tour that also brings the band to New Brunswick, NJ on Saturday Jan 17 and completes in Atlanta on Jan 24.

As we reported in July, Graf Orlock is prepping Destination Time Today, due on March 3rd via Level Plane. Decibel proclaimed it one of the most anticipated albums of 2009. I gotta agree.

We interviewed Wetnurse drummer Curran Reynolds around the time the album came out.

Lewd Acts recently signed on with hardcore heavyweights Deathwish Inc, and are finishing up their LP with Kurt Ballou at God City Records. Until that drops, the band has a few 7"s including their latest one, Lung Patrol, on 16oh Records... check out "Play Me Something That I Know" from the Lung Patrol 7" above and pick one up at the show!

By the way, I'm not usually one to point out merch, but one gander at Graf Orlock's merch from past and present is good for a chuckle.

All dates and Sunday's flyer below... 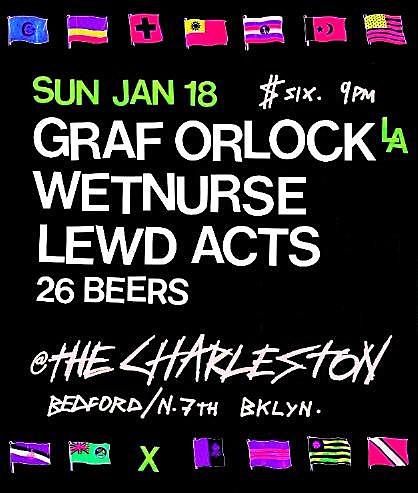