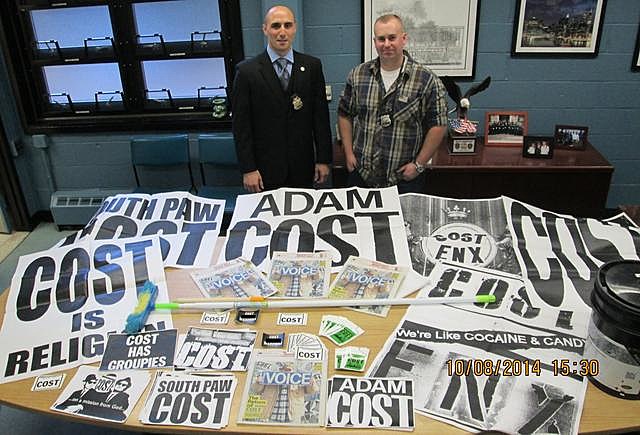 Those who have been in NYC for a while and have an eye for famous graffiti arists, or who read the March 2013 Village Voice cover story, have no doubt noticed the relatively recent and major return of nineties legend COST. Well, it was fun while it lasted. Gothamist points out:

. Last night the police department issued an unusually self-congratulatory press release, written in the style of a heavily slanted news article, about the arrest of Adam Cole, better known to New Yorkers as COST, whose murals and wheatpastes are a familiar sight, whether they are collaborations with others like with REVS or ENX.

According to the NYPD, Cole, 45, was busted on Sunday, and police officer Colin Sullivan has been determined to nab Cole. He even did research!

You can read the NYPD's entire press release below...

A self-described "anti-artist" known in the 1990s as one of the city's most prolific graffiti vandals - before he entered a self-imposed, 16-year hiatus - has reemerged with vigor, and found himself again in handcuffs.

Adam Cole, a Queens native who once specialized in wheat-pasting posters featuring his tag "Cost" onto walls and doors of private buildings and other structures, was spotted strolling back to his car on otherwise-desolate West 13th Street just before 4 a.m. on Sunday.

The "Cost" moniker, affixed by a glutinous mixture of water and flour or starch, popped up again across Manhattan over the past few years, and one particular cop took notice.

Police Officer Colin Sullivan read up on the 45-year-old Cole, who had given extensive interviews over the years to newspapers and online sites, and showed published photos of Cole, aka "Adam Cost," to his 6th Precinct colleagues - urging them to be on the look-out now that the plastered placards had reappeared.
"The tags I saw recently appeared to be pretty fresh," Sullivan said. "Everyone in my unit was aware of what this guy looks like. I've been boring these guys to death with Adam Cost pictures."
The hindering paid off this week as Sullivan's partners in the Cabaret Unit thought they recognized the man out for a super-early Sunday morning stroll. It didn't hurt that Cole was carrying an extendable pole with a wet brush affixed, and his clothes were covered in what appeared to be a goopy paste.
"We noticed this man who fit (Cole) to a 'T'," Sgt. Michael Alfieri said.

Alfieri, along with Police Officers Craig Sikorski and William Morris, then looked up and saw a rectangular "Cost" poster approximately two feet high and three feet wide - the fresh adhesive still dripping from it - emblazoned on scaffolding about 20 feet above a rare wine shop. A glue-filled container sat on the sidewalk below.

The lid for the drum of glue was next to Cole's Porsche Cayenne parked on the same Meatpacking District block, between 7th and 8th Avenues; additional drums and more long brushes could clearly be seen through the windows of the luxury SUV.

The NYPD executed a search warrant on the vehicle on Wednesday, and recovered adhesive, brushes, as well as hundreds of stickers and posters with "Cost" printed on them.
Cole was charged this week with criminal mischief, making graffiti, and possession of a graffiti instrument in nine separate incidents this year. He was released on bail after arraignment, and is due in court again on Friday.

In the 1990s, Cole was one of the best-known graffiti-ists, later dubbed "legendary" in a newspaper story marking the return of his tag to the quiet, dark streets of Manhattan.

Despite his ubiquitous work, he was arrested only a couple of times, in 1994, for using a broad-tip marker on a subway wall in Queens (and inexplicably carrying a canister of tear gas), and for tagging his nickname on the steps of another train station.

Cole then went underground for years. His tag first resurfaced around 2010, and more recently he has taken to Instagram, the online photo- and video-sharing social networking service, where his thousands of followers can view his latest tags around the five boroughs.
Meanwhile, police have their own video of the resurgent graffiti vandal.

A minutes-long surveillance tape outside one tagging location, Bar Naná on Gansevoort Street, shows Cole step out of his Porsche and get to work brushing on "Cost" posters with the very sticky wheat paste.

"This stuff is impossible to get off the wall," Police Officer Sullivan said. "That's why it's so expensive to remove."