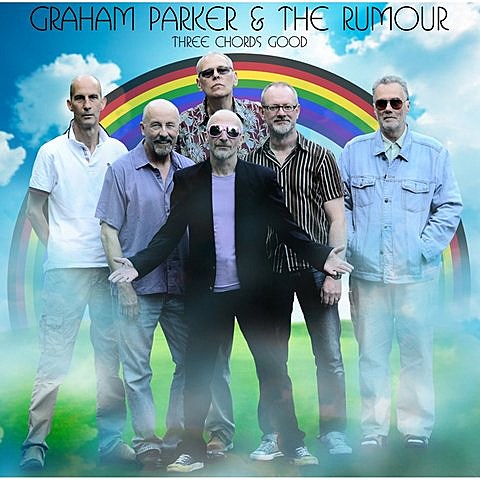 Arriving on the mid-'70s London scene as a rough'n'ready product of the pub-rock era -- an R&B- loving Nick Lowe with a sharper, more ambitious pen, as it were -- Parker predated Elvis Costello and Joe Jackson, both of whom would second his illustration that the singer/songwriter idiom could be recharged, giving intelligent rock fans an excitable and energetic alternative to (slightly) older guardsmen like Bob Dylan, Neil Young, Randy Newman and Van Morrison. - [Trouser Press]

Last year, pub rock survivor Graham Parker reunited with his old band, The Rumour, to make Three Chords Good, their first album together in 31 years. You can stream the album below via Spotify.

Graham and the Rumour are currently touring the record in America and will be playing the previously mentioned NYC show at Concert Hall at the NY Society for Ethical Culture on Saturday (12/1, tickets) with openers The Figgs, and then The Paramount Theatre in Long Island on Sunday (12/2, tickets) which is a co-headling show with Ian Hunter. All tour dates are below.

Parker's had a long career, and had college radio hits with his 1988 album The Mona Lisa's Sister and has kept on going since. He may be about to get another moment in the spotlight as fan Judd Apatow tapped Parker to not only contribute songs to his new film, This Is 40, but also appear in the film. The comedy, a sideways sequel to Knocked Up (about Paul Rudd's character from that film) will be out in theaters December 21. The soundtrack was produced by Jon Brion and also features Norah Jones, Fiona Apple, Lindsay Buckingham, Paul McCartney, Yoko Ono, Paul Simon, Wilco, Loudon Wainwright and more. Tracklist is below, as is the trailer for the film.

A list of tour dates, album stream, videos, and the This Is 40 trailer and soundtrack tracklist, below...

Graham Parker and the Rumour - Stupefaction