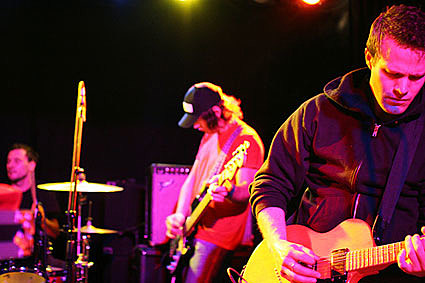 Grails have a stupendous new EP out (Take Refuge In Clean Living on Important) and a newly minted association with Om, not to mention a relatively sick back catalog that has included a split with Red Sparowes.

Nadja, well let's just say its hard to keep up with a band as prolific and prolifically awesome. Nadja has announced ANOTHER new record, The Bungled & the Botched via Consouling Sounds on July 10th (only 500 copies!!!).

Both of them are in town tonight (June 26) at the Knitting Factory and we have THREE pairs of tickets and THREE copies of Nadja's firestarter on The End, Skin Turns To Glass, to giveaway. Instructions for entering, and all tour dates, below...

TO WIN a pair of tickets: email BVCONTESTS@HOTMAIL.COM (subject: Grails) with your first and last name. Three winners will be picked and notified ASAP.

TO WIN a Nadja CD: email BVCONTESTS@HOTMAIL.COM (subject: Nadja) with your first and last name. Three winners will be picked notified ASAP, and then asked for their mailing address so the CD can be shipped.

* with Nadja
** with Motorpsycho