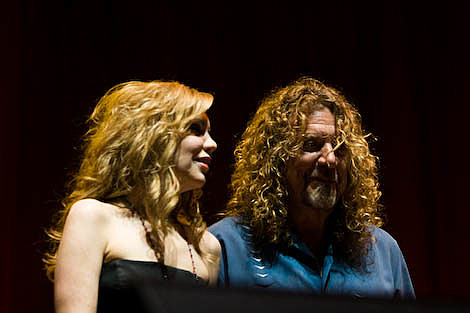 Rounder Records, a venerable independent label based in the Northeast, released "Raising Sand," and it has become one of its biggest hits. Its multiple nominations were old hat for Alison Krauss, who before Sunday had already won 21 Grammy Awards. But none was for a project quite this adventurous.

"We ostensibly come from such different places on the musical map," Robert Plant said in a media conference backstage Sunday. "Alison showed me so much I had never been exposed to."

That Plant is still learning new tricks is a testament to his artistry. That he's not touring with a reunited Led Zeppelin is a sign of enduring integrity. That's a lot of money to be passing up, even if "Raising Sand" did win five Grammys.

But Plant was having none of it. The singer again was confronted with the inevitable question Sunday about his future involvement in any Zeppelin tour.

"How old are you, man?" Plant responded. "Because you look older than me. You try to do 'Communication Breakdown' in these pants." [Chicago Tribune]